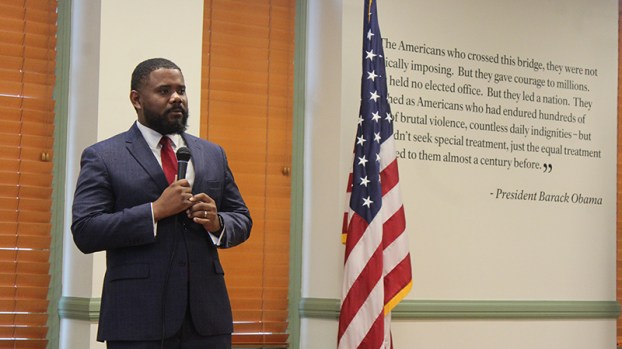 The Selma to Montgomery National Historic Trail (NHT) Site is collaborating with the City of Selma to expand the Selma Interpretive Center.

The upcoming expansions were the subject of a meeting held at the Interpretative Center on Thursday afternoon.

Hillary Conley, Cultural Resource Manager for the Selma to Montgomery NHT, delivered a presentation on the plan for the project.

Rehabilitation to the roof and facades, structural repairs to the floors and roof and mechanical, electrical and plumbing enhancements are all required to the building at 4 Broad St. to make the expansion possible.

Conley said the expansions will be architecturally consistent with the Interpretative Center’s Italianate detail.

“The National Parks Service (NPS) has been very invested in capturing the story [of the Civil Rights Movement] and preserving it,” said Conley.

The expansion is under the supervision of City of Selma Planning and Development Director Henry Thompson.

Thompson estimates that the construction woill be completed in May, but couldn’t say when the new exhibits would be installed.

According to Thompson and Conley, Line Item Construction Funds have been appropriated by Congress for the completion of the expansion.

Selma Mayor Darrio Melton made an appearance at the meeting to discuss the importance of the additions to the Interpretative Center in telling the story of the Civil Rights Movement.

“Today is a great day for the City of Selma, great day for our nation,” said Melton. “We look forward to continuing to uplift the story of democracy here in the United States of America because I do believe that Selma is the birthplace of democracy and we will continue to let our light shine and let the world know that there is freedom and democracy.”

The MJ 93-90 Foundation and the Selma-Dallas Chamber of Commerce held their annual Veterans Appreciation Breakfast on Thursday morning at... read more