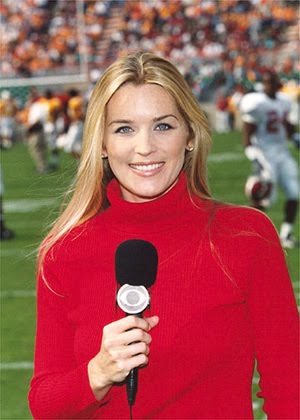 The Selma Quarterback Club has added another popular female sportscaster to its list of guest speakers.

Jill Arrington, a Los Angeles-based sportscaster, will be the guest speaker at 6 p.m. Monday night at the Selma Convention Center.

Arrington, 47, is best-known as being the lead sideline reporter for SEC football games, U.S. Open Tennis tournament and feature reporter on the NFL Today Show during the early 2000’s.

A Conyers, Georgia native, Arrington is currently a reporter with KCBS-TV and KCAL 9 in Los Angeles.

“Jill Arrington will likely be one of our top speakers for the year,” Frazer  said. “She has spent a lot of her career on the West Coast and many in our part are not too familiar with her.  She has been very successful in her broadcasting career.  No doubt everyone will come away very entertained.”

Arrington has a daughter, Presley Kate Panaro, born in 2004. She joins Holly Rowe and Lauren Sisler, both employed with ESPN, as female announcers to speak at the Selma QB Club.

Arrington is a 1994 graduate of the University of Miami, majoring in journalism and political science, minoring in drama. She played tennis at Miami and is a former Miami Orange Bowl Princess.

Dallas County could have its largest number of state football playoff teams in a decade. Keith High and Meadowview Christian... read more