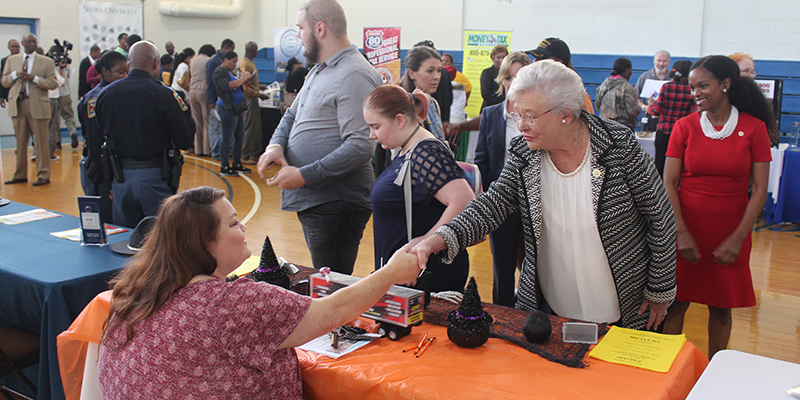 Selma University played host on Thursday to a regional job fair hosted by the Alabama Department of Labor (ADOL) in collaboration with the university, Alabama Career Center System, Alabama News Network and the Governor’s Office of Minority Affairs (GOMA) as part of the Alabama’s Historical Black Colleges and Universities (HBCU) initiative.

“Workforce development has been a key point of our administration,” said Alabama Gov. Kay Ivey. “It is our hope that every Alabamian that wants to work has the opportunity to do so. Today’s event is all about creating a forum where we can work together to make gainful employment for those searching for them … I know this event will be a great success. We have over 40 employers representing almost 2,000 jobs that are available.”

Nichelle Williams Nix, the Director of GOMA, said part of the idea of the initiative is to increase general awareness of HBCUs.

“The governor’s office launched a HBCU co-op program that puts HBCU students in touch with employers and both private and public sectors. The Alabama Department of Labor has done an amazing job connecting Alabamians with the needs of employers around the state.”

“Make no mistake today will be a generational change for a lot of families,” said ADOL Secretary Fitzgerald Washington. “We are excited to partner with Alabama News Network and the Governor’s office. We couldn’t do this alone. That’s why it takes a strong collaboration.”

Roe added positions filled at Crown could be performed by most making the job positions more marketable.