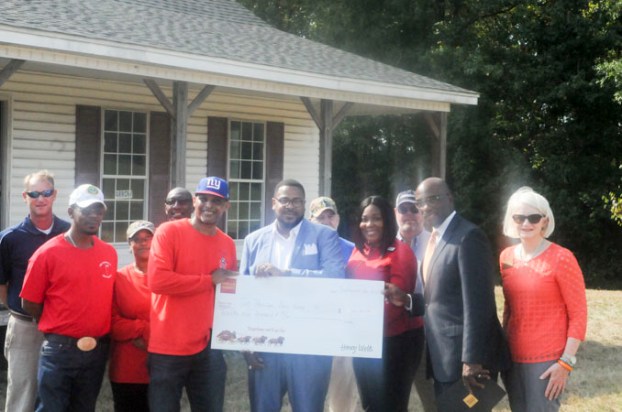 Wells Fargo presented a $25,000 check to The Prodigal Son’s House on Thursday.

The Prodigal Son’s House, a non-profit organization devoted to establishing a home for homeless and recovering veterans, was founded by Andre Smith in 2015. Smith owns the home and plot of land, located at 10784 River Road. Smith overcame alcohol problems and want to assist veterans who have substance abuse issues.

“We want to give thanks to Wells Fargo and we appreciate them accepting our applications,” Smith said. “A lot of veterans don’t have any place to go. I can relate to them. We’ll do our best to serve the community.”

“I’m extremely excited to be a part of this,” Peterson said. “We have a long history of supporting veterans.”

“I believe this program will not only be great for Selma, but for the other areas that we will eventually branch out,” Jackson said.

David Ousley and Keith Moore of Frasier-Ousley Construction and Engineering, Inc. both attended the signing. The company are The Prodigal Son’s general contractors.

The Selma Chapter of The Links, Inc. in collaboration with Get Fit Selma 2019 will host their 24th Annual Walk-A-Thon... read more