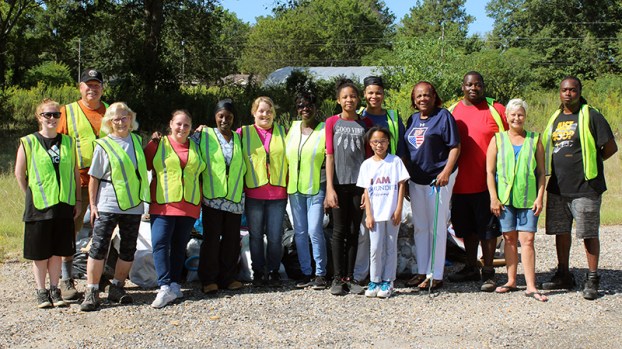 Mountain of trash collected during Ward 3 clean up

Selma City Councilwoman Miah Jackson led a large contingent of volunteers in picking up trash throughout Ward 3 Saturday morning, culminating in a mountain of trash piled up near Church of the Nazarene off Cahaba Road.

Jackson’s effort relied on two groups – one, which she led alongside Selma City Councilwoman Jannie Thomas, who underwent eye surgery Friday but made a point to be on the scene all the same, tackled areas along Cahaba Road, in Cigar Village and places between and beyond; simultaneously, Dallas County Commissioner Valerie Reubin and volunteers from Morgan Academy were busy cleaning Memorial Stadium and the surrounding grounds.

Additionally, volunteers showed up with mowers and tractors and went to work chopping down overgrown fields in the area.

According to Jackson, more than 30 volunteers showed up for the effort which began at 7 a.m. and lasted until nearly 11 a.m.

The Selma Police Department (SPD) did its part as well, with patrol cars flashing their lights and holding up traffic so the clean-up crew could cross from street to street in relative safety.

One of the volunteers in Jackson’s group was Heather Byrd Lynn.

Lynn also celebrated Thomas’ involvement with the effort, saying that she kept the volunteers motivated and exuded an excess of energy and commitment.

For her part, Thomas was celebrating the work being done by Morgan Academy students and volunteers.

“They’ve really done an excellent job at the stadium and the park,” Thomas said.

Jackson hosts similar efforts on the third Saturday of each month, a tradition she has overseen for the last several years.

VFW sets table for one

The joviality of the crowd at the Veterans of Foreign Wars (VFW) Post 3016 headquarters Saturday contrasted sharply with the... read more