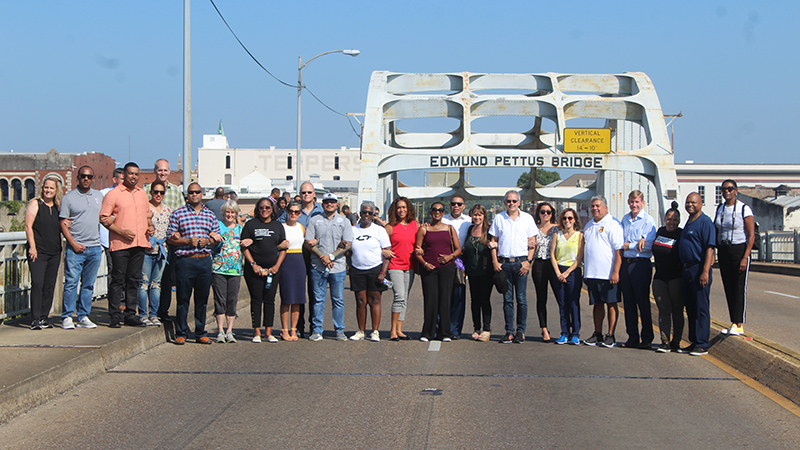 Over two dozen elected prosecutors from across the country arrived in Selma Monday morning to visit the historic Edmund Pettus Bridge.

The prosecutors visited the Queen City as part of their tour examining a closer look at the country’s legacy of racial injustice and violence.

“Our organization works with elected prosecutors around the country. We’re a group of leaders who believe our criminal justice system has grown too large and criminalized too much,” said Miriam Krinsky, Executive Director of Fair and Just Prosecution, the organizer of the trip.

“They care deeply about issues around racial equity many of them have broken a glass ceiling through their elections. We thought it was important to bring them to a historic place where we saw our country at its worst as they try to build a vision for our country at its best. To be able to come to reclaim this territory and to inspire them to go back to their jurisdictions and talk about what they learned to fight the fight that much harder is what the aim of the trip was about.”

The elected prosecutors visited several other civil rights and justice sites on their two-day tour including the Legacy Museum, National Memorial for Peace and Justice, The Southern Poverty Law Center and Dexter Avenue King Memorial Baptist Church in Montgomery.

“We had a group of prosecutors from across the country to come in and talk about all the major issues we’re dealing with today as far as justice reform, fair and just prosecutions…all of those issues,” said District Attorney Michael Jackson. “We’re trying to make sure we can all get on the same page and send a message out there that we want the court system to be the best in the world here.”