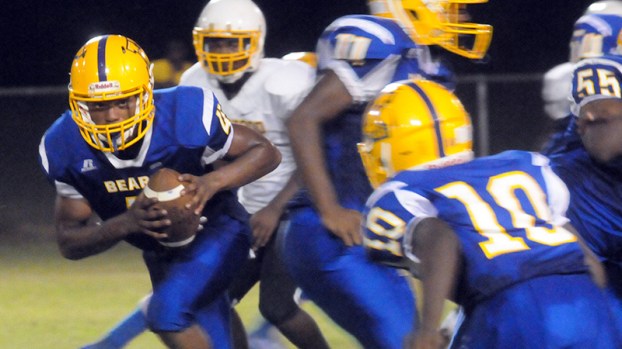 An exciting and tragic scene unfolded at J.D. Caldwell Stadium Friday night at the Keith High School Bears went toe-to-toe in area play against the Ellwood Christian Academy Eagles – the Bears’ 35-0 victory over the Eagles doesn’t adequately portrayed the drama that unfolded on the field.

The Bears struck right out of the gate off of a 90-yard kick-off return from Antonio Woods, followed by a successful extra point attempt from Jeffery Callens, bringing the score to 7-0 only 20 seconds into the first quarter.

The Eagles quickly wound up at fourth down on their first possession, but the Bears fumbled the punt and it was recovered by ECA at midfield – the momentum was to no avail, however, and the Bears took control after another punt.

Shortly after getting the ball, Woods broke loose for another 55-yard run that brought the Bears within striking distance of the end zone, setting the stage for a roughly 15-yard touchdown run by Quintavis Woods.

The kick was no good and the Bears led the Eagles 13-0 with just over five minutes left in the quarter.

A few minutes later, the Eagles punted away to the Bears and Quintavis Woods again found an opening for a gain of about 30 yards, but the play took a toll – Johnson trotted to the sideline and it was clear that his arm was broken between the wrist and the elbow.

Play continued, however, and it wasn’t long before La Quinton Johnson was able to score on a 12-yard run.

A penalty on the extra point attempt pushed the Bears back, so they opted for a trick play to go for two – Callens took the snap, then pitched the ball to quarterback Jared Edwards, who tossed it to Jayln Jones standing in the end zone, bringing the score to 21-0 with little more than a minute left in the first quarter.

Only two minutes into the second quarter, Edwards threw a 40-yard bomb to Johnson, putting the Bears yet again within reach of the end zone, which was shortly crossed by Edwards on a 10-yard dash.

The score was 27-0 after a failed extra point attempt.

The Bears struck again a few minutes later, when Edwards punched in a 40-yard advance to bring the score to 35-0 after another successful point-after attempt.

With 3:42 left in the half, tragedy struck – following a collision along the Eagles’ sideline, ECA running back Emanuel Blanks laid nearly motionless on the sideline as coaches, trainers, referees, teammates and others gathered around.

The game was delayed until an ambulance could get onto the field and carry the injured player to a nearby hospital – according to one coach, there were moments when Blanks was struggling to speak; another said that he was unable to move his legs.

After a lengthy delay, the game resumed with two minutes left in the second, where nothing happened.

Because the game was an area match-up, following halftime the referees and coaches agreed to allow for the third and fourth quarters to be played for only one minute and the Bears claimed a victory.

In the huddle afterwards, Eagles Head Coach Anthony Lumpkin congratulated his players on the victory but noted that improvement still needs to happen.

“We’re still not where I’d like us to be,” Lumpkin said, adding that his players needed to do some “soul searching” about how to win games. “We’ve got to bring it together. You’ve got to be on the same page.”

Lumpkin noted afterward that the injuries suffered during the game, most specifically that of Quintavis Wood, who he called a work horse, were going to be difficult to overcome moving forward.

“It’s hard to replace that guy,” Lumpkin said. “Hopefully, somebody will step up so we can be successful this season.”

The Selma Saints defended their home turf with tenacity Friday night against the Benjamin Russell Wildcats, shutting out the visiting... read more