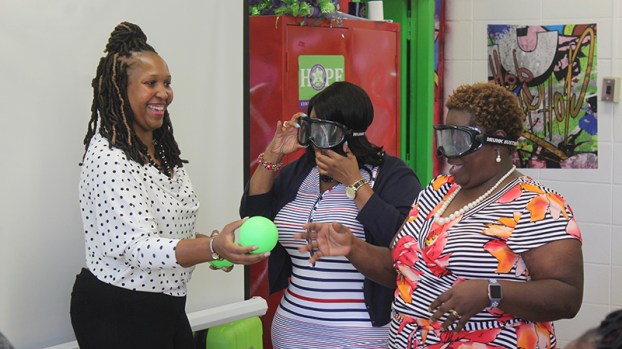 Martin added that the event was held on Sept. 11, in remembrance of the first responders who lost their lives in the attacks on the World Trade Center on Sept. 11, 2001.

“What was special about that day, even though it was tragic,” said Martin, “Is that that America really came together. So, what better day for our community to come together?”

Martin said that the DFC relies on the first responders and the work they do in order to complete the organizations initiatives to keep Dallas County’s youth drug free.

According to Martin, first responders, such as ALEA, provide the organization with data so that the DFC can discover how effective their programs are.

Martin also added that the DFC is currently working to outfit area first responders with Narcan, a nasal spray used to reverse an opioid overdose, as well as the proper training for the responders to use the spray.

Before the fun and games Martin had planned commenced, Carol Williams, the DFC’s external evaluator for federal grants, shared some data about substance use among young people with the first responders, educators and elected officials that filled the room.

Among the statistics reported by Williams were that alcohol is the most commonly abused substance by teens, followed closely by marijuana and then prescription drugs.

Williams also reported that tobacco has increased, due to the popularity of electronic cigarettes, or “vaping”.

“Not everybody is into data but I think it’s good for the community to see the numbers and the outcomes,” said Williams.