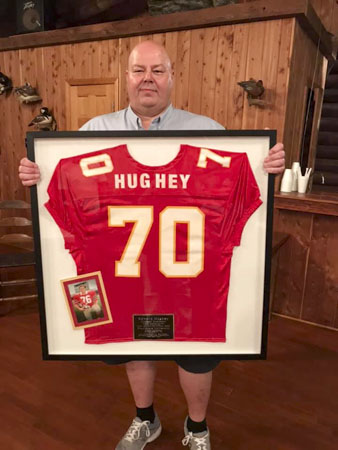 A former Morgan Academy football player recently had his jersey retired by the school.

Edward Hughey was a standout offensive and defensive lineman for the Senators in the early 1980’s.  His last football season at Morgan was 1983.

Morgan Academy had originally planned a presentation for Hughey with former classmates at halftime of its season opener against Pike. Liberal Arts but it was cancelled because of a heavy rainstorm on Aug.23.

Hughey was named All Dallas line and most outstanding offensive lineman at the AISA All-star game in 1983. He was part of the Morgan Academy senior class of 1984.

After graduating from Morgan, Hughey earned a scholarship to Troy university, then a NCAA Division I-AA school.

Hughey was a starting offensive lineman on Trojans teams that won national championships in 1984 and 1987.

Hughey earned four letters, including two as a starter and made second team All Gulf South Conference.

Hughey’s replica jersey will hang in the new Morgan Academy gymnasium alongside Brett Holliman and Reid McMilion. They are the only jerseys to get retired by the school.

The biggest rivalry in Dallas County played out Friday at Memorial Field as the Selma High Saints triumphed over the... read more