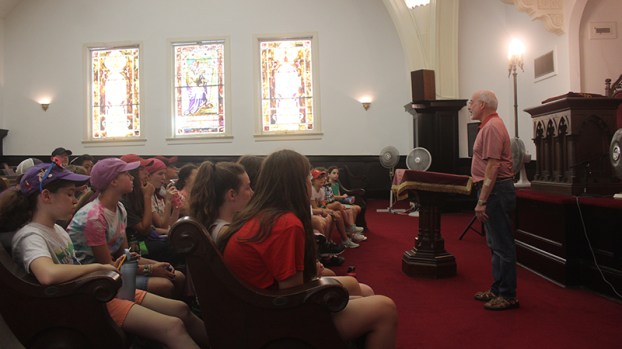 The middle schoolers of Saul Mirowitz Jewish Community School in St. Louis, Missouri arrived in Selma Tuesday afternoon to learn about the Civil Rights history of the city as well as explore Temple Mishkan Israel, which served as a hub for Selma’s once thriving Jewish community.

According to Mirowitz Student Rabbi Scott Slarskey, this isn’t the first time the school has traveled to Selma.

Every year the school takes a trip to a location where they rotate learning about the topics of environmentalism, poverty and Civil Rights, with this year serving as a Civil Rights trip year.

The 6th, 7th and 8th-graders began their tour of the city at the temple where they learned about the 120-year-old buildings history from the temple’s president and lifelong Selma native Ronnie Leet.

Leet showed the children the temple’s sanctuary which remains nearly the same as it did 120 years ago when the building was constructed by Jewish immigrants.

“Pretty much everything you see here is the same as it was in 1899,” said Leet.

After allowing the children to take in the sights in the sanctuary, Leet lead the middle schoolers to another room where they had the opportunity to watch the Selma 200 short film made by Blue Magnolia Films earlier this year.

The film talks about the building’s past, the history of downtown Selma, which, according to Leet, was once 50 percent Jewish-owned businesses, and the future plans to restore the temple.

Leet then shared his own personal relationship with the historic building and told children what it was like to grow up Jewish in Selma.

“It was good to grow up Jewish in Selma, Alabama,” said Leet.

Mirowitz Head of School Cheryl Maayan thanked Leet for all of his preparation for the presentation.

“We’ve been to Selma before but we’ve never really had the opportunity to learn about the Jewish community before,” she said. “This has been a huge treat for us.”

“I hope that it’s powerful for them to see were Jewish people are present during struggles for justice and have powerful voices,” said Slarskey.

Where once there was an empty lot covered in red clay soil, there is now the skeleton of a building... read more