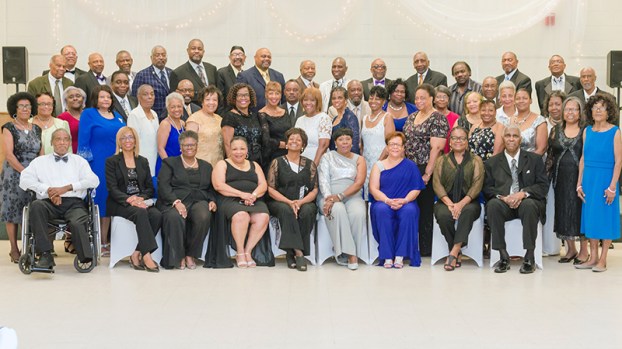 The R.B. Hudson High School Class of 1969 recently held its 50th anniversary reunion with a weekend-long slate of events centered around its theme, “50 Years Strong and Golden.”

Around 60 classmates and 24 guests, among them former teachers, kicked off the event with a reception at the George P. Evans Reception Center with a variety of games music.

Those gathered also enjoyed a variety of candies popular during the graduates’ childhood and a dinner from the Edmundite Missions’ Chef Dominick.

The next morning, classmates took a tour of the Selma Interpretive Center and were flooded by memories of the tumult surrounding Selma during the 1960s.

Following the tour the group gathered at the R.B. Hudson STEAM Academy to tour the building, get a photo on their old stomping grounds and sit down for lunch.

During the tour of the school, the graduates were led by two current students and, although the building has changed, the class was overcome with memories of walking the halls 50 years ago.

That evening, the class hosted at banquet and dance at the Selma Convention Center, where a memorial was placed to honor deceased classmates.

On Sunday, the class gathered for church services at St. Paul Missionary Baptist Church where classmate Rev. Eddie Marshall is the pastor.

After the service, the class gathered for lunch and presented R.B. Hudson Middle School Principal Cicely Curtis with a $2,000 donation and pledged to support the school’s ongoing renovation work.