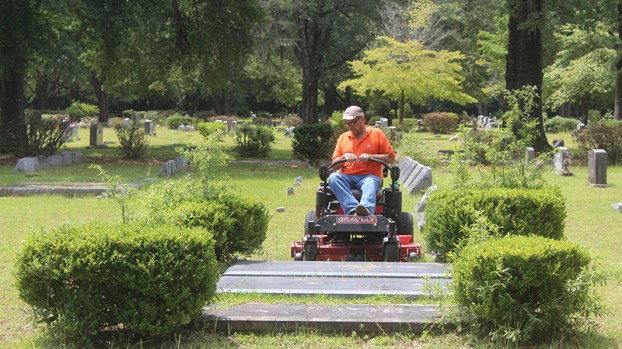 With Selma’s cemeteries in a state of overgrowth, a few concerned citizens have taken it upon themselves to clean the area’s up themselves.

John Coon, the superintendent of the city’s three cemeteries, said the work these individuals is greatly appreciated.

“I’ve never seen anyone work as hard as this man right here,” said Coon as Bruce Barnes quickly cut down an overgrown bush at New Live Oak Cemetery. “He’s cut every azalea bush in this cemetery…there’s 36 divisions in this cemetery and each one of them have about 50 azalea bushes… you do the math.”

Barnes has been working at clearing New Live Oak Cemetery of overgrown azalea bushes for over a month now.

“I’m sure he’s consumed a lot of Gatorade,” said Coon.

Barnes has been working so diligently the past month in an effort beautify the cemetery where many of Barnes family is buried.

Baxter Ellzey also has family at the cemetery, including his grandfather, Earl Ellzey, who was one of the owners of the Selma Cloverleafs, Selma’s former minor league baseball team.

“That was an emotional moment for me, his funeral,” said Ellzey.

Ellzey has been working especially hard to beautify the cemetery, in a few weeks, he won’t be able to work very hard.

“I’ve got chemotherapy coming up,” he said. “I’ll be out for a couple of weeks after that.”

Ellzey, even during his battle with cancer, has found the time to get on his zero-turn mower and do his best to cut down the overgrown grass at the cemetery.

“It’s a blessing to be out here every day,” he said. “I thank God for every day I’m above ground.”

Ellzey, and Barnes, both said that while there’s still a lot of work to do, the cemetery looks significantly better than it did a month ago.

“After the first mow, I thought cows were going to line up behind me,” he said. “It looked like hay.”

Ellzey added that the cemetery is too beautiful to be in a state of overgrowth, citing the huge oak trees that tower over the headstones, creating a canopy over the many final resting places.

“It’s too pretty a place to be like this,” he said.

A new location and new classrooms were just a few of the things celebrated on Thursday at the ribbon-cutting ceremony... read more