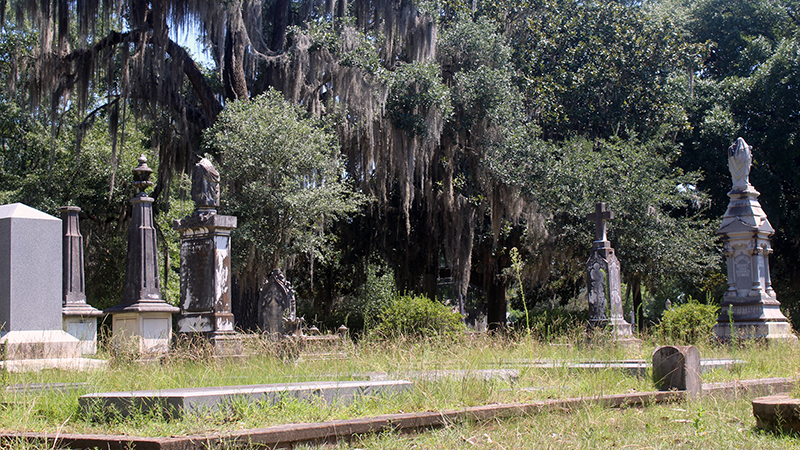 Doug Buster, whose Cemetery Preservation Group (CPG) is looking to tackle damaged headstones, opened graves and overgrown plots in three Selma cemeteries, remembers vividly one of the first jobs his organization took on after being approved to work.

Buster recalled an online post in which a man was looking for help restoring the headstone of a young girl who had died roughly 50 years ago.

The little girl’s mother babysat the man as a child and he never knew of her troubles – she had lost her husband, a pilot instructor, only months before losing her newborn daughter – but recollected the black wreath adorning her door.

The man found the little girl’s headstone and Buster jumped at the opportunity to fix it up.

“It was terrible,” Buster said of the headstone. “All kinds of growth and moss.”

The crew took to cleaning the marble headstone, using chemicals approved for use on national monuments that cleans the surface and kills bacteria growing within the marble, and Buster was taken aback when it began turning brown.

“It scared me to death,” Buster said.

But the treatment worked – once the bacterial roots living within the stone were eradicated and began to fall away, the marker began to shine again.

Buster said whenever he and his team are feeling frustrated and tired, they think of that little girl, whose story likely mirrors a thousand others hid amongst the tombs in the Queen City’s cemeteries.

“Selma is a very rich, historic place,” Buster said. “We are fortunate to have a lot of tourists that come through Selma. I think it speaks to the community as to how we maintain our cemeteries – if we don’t show these people that are buried there the decency and respect to maintain these cemeteries, that’s a reflection on us as a community.”

Buster launched his organization with the intention of taking on the heavy-lifting that couldn’t be done by the city’s cemetery workers – repairing headstones and closing graves, removing dead trees and limbs, repairing retaining walls and fences – but the mass lay-off of city workers last year has caused the group’s work to come to a standstill.

“We basically started out with the intention of doing things that the cemetery employees could not do, some of the heavy-duty stuff,” Buster said. “When they were laid off, our mission had to be expanded.”

Now, Buster said, the group is focused on promoting its “Adopt-A-Plot” program, which allows local churches, organizations and residents the opportunity to take ownership of small plots within the three cemeteries – New Live Oak, Old Live Oak and Lorenzo Harrison Memorial Gardens – and maintain the grounds in those areas.

Currently, only a handful of plots have been adopted – the Church of Jesus Christ of Latter Day Saints has taken on two plots in Old Live Oak and the Black Belt Benefit Group’s (BBG) Clay Carmichael has taken on another.

“That seems to be the most critical thing right now – keeping the grass under control and, of course, warding off snakes or any other pests,” Buster said. “We’ve got tourists and guests coming through that don’t need to walk through this knee-high grass.”

Though Buster acknowledged the immense amount of work that citizens have put in to clean up the cemeteries, he believes his organization’s plot adoption program allows for those areas to maintained long-term, which means his organizations can focus on the more detailed work.

Once the grounds are maintained, Buster’s first move will be to repair and close open graves, an effort he says should be undertaken immediately both because of the health and safety hazards associated with open graves and out of a sense of “common decency.”

After that, Buster plans to recruit a company to remove dead trees and trim back dying limbs to ensure that no one is injured while visiting a deceased loved one in one of Selma’s cemeteries.

Once that’s done, the cleaning and leveling and repairing of broken markers can begin.

There is no cost associated with adopting a cemetery plot – those interested must simply sign a liability waiver and commit to overseeing the upkeep of their areas.

“Anything that anybody could do is much appreciated,” Buster said. “This is a very important and very worthwhile endeavor. I truly believe that there are enough good people that this will be taken care of.”

For more information or to adopt a cemetery plot, visit www.cpgllc.org or email Buster at doug@cpgmail.org.

Infrastructure bill could be boon for Selma