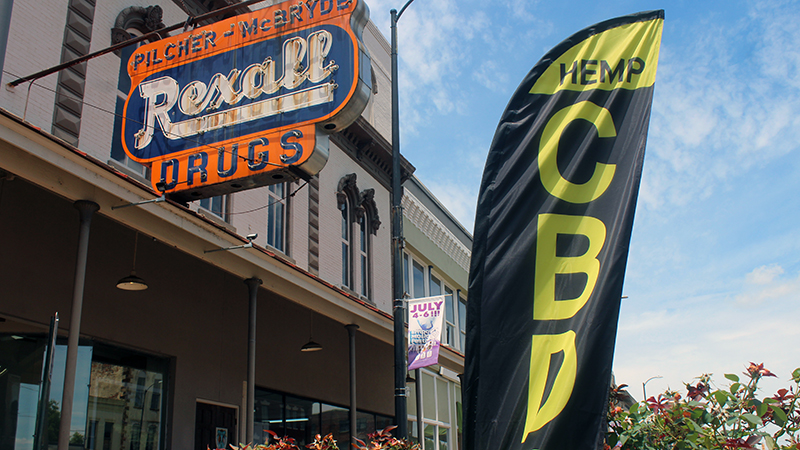 A light breeze whipped through Broad Street Tuesday morning, causing the oversized flags in front of Pilcher-McBryde Drugs and Carter Drug Co. heralding the availability of cannabidiol (CBD) products inside.

Both stores are offering products from Ananda, a company producing CBD made from hemp harvested from former tobacco fields in Kentucky, which made its products available to American Pharmacy Co-Op, Inc. (APCI) prior to the products’ legalization in Alabama.

When legislation was signed two weeks ago making CBD products with up to 0.3 percent tetrahydrocannabinol (THC), the psychoactive ingredient in marijuana, legal in Alabama, the local pharmacies were ready within days to begin making the products available to local customers.

Williamson noted that Ananda products come with unique QR codes that make it possible for customers to know exactly what’s in each product, when and where it was grown and tested and much more.

Williamson noted that CBD products have been widely available in gas stations and novelty shops for some time, but there are a multitude of reasons why a customer seeking relief from the myriad of ailments that CBD is known to alleviate, such as anxiety, depression, pain, digestion and more, should purchase products from a reliable source.

First, Williamson said, many people don’t realize that hemp crops are very efficient at removing toxins from the soil, so efficient in fact that many European nations grow the crops specifically to remove iron and other undesirable minerals from the soil – if those crops are used to make CBD products, those products will inevitably be tainted by whatever mineral or toxin was pulled from the soil.

Additionally, the products being sold at local pharmacies are of a higher quality and, since there are some interactions between CBD products and other drugs, customers have the benefit of a pharmacist’s wisdom when deciding whether CBD is right for them.

“As pharmacists, we’re looking for healthy alternatives,” Williamson said. “This is a natural product that doesn’t have any negative side effects.”

“There’s a lot of people looking for different solutions for the health issues they have,” Creech said. “A lot of these people are looking to CBD as a supplement.”

Creech noted that pharmacists are not only trusted healthcare professionals, but are also the most accessible and therefore the most effective in ensuring that patients receive what they need, including advice on dosage and strength.

Both pharmacies noted that there has been a boom of interest in the products locally since their debut – Creech said he has been “pleasantly surprised” with the response and Williamson noted that some of the area’s new hemp farmers have showed up inquiring about the products.

“We’re just getting started,” Creech said. “We’re eager to see the benefits it may provide.”

“It’s an alternative medicine, so people can get the benefits of hemp or CBD without buying the illegal stuff,” Williamson said.