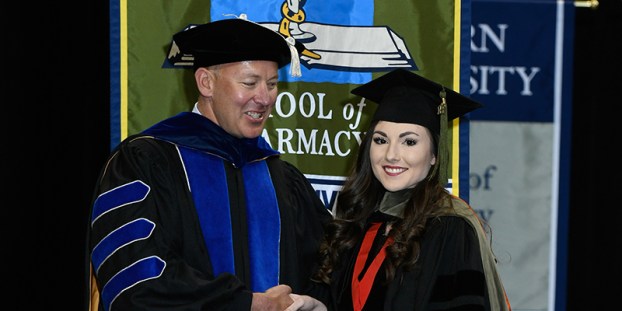 Auburn University’s James I. Harrison School of Pharmacy held its Spring 2019 commencement ceremony on Tuesday, May 6 at Auburn Arena.

The class of 2019 included 147 students receiving the Doctor of Pharmacy (Pharm.D.) degree. One student received a Master of Science (M.S.) degree, and 15 others received Doctor of Philosophy (Ph.D.) degrees. The ceremony included a commencement address from Dr. Stephen Davis, a member of the Class of 2008, while the student address was given by Glady’s Tucker Heard. The Oath of a Pharmacist was administered by Class of 1983 member Pamela Boyd Reeve.

Among the Pharm.D. graduates was Selma native Caitlin Elizabeth Autrey. A 2012 graduate of John T. Morgan Academy, she is the daughter of Davy and Jan Autrey. Previously, she earned bachelor of science degrees in biology and chemistry from Judson College in 2015.

As the public pharmacy school of the state of Alabama, the Harrison School of Pharmacy continues educating more Alabama pharmacists than anywhere in the world with 111 of the graduates hailing from the state. Additionally, the vast majority of the graduates are remaining in the state to continue serving the people of Alabama.

Auburn University’s Harrison School of Pharmacy is ranked among the top 20 percent of all pharmacy schools in the United States, according to U.S. News & World Report. Fully accredited by the Accreditation Council for Pharmacy Education (ACPE), the School offers doctoral degrees in pharmacy (Pharm.D.) and pharmaceutical sciences (Ph.D.) while also offering a master’s in pharmaceutical sciences. The School’s commitment to world-class scholarship and interdisciplinary research speaks to Auburn’s overarching Carnegie R1 designation that places Auburn among the top 100 doctoral research universities in the nation.  For more information about the School, please call 334.844.8348 or visit http://pharmacy.auburn.edu.