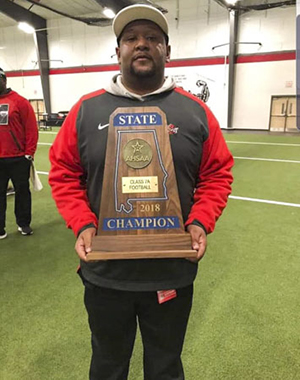 “We’re all shocked,” Miller said. “He was one of the best people I’ve ever known. He cared about the community and his students. It’s God’s will and we’re good with that.”

“I hate to hear this bad news, he taught me everything I needed to know about life and football,” Parnell said.

“When I was ready to give up on everything, he was there,” Freeman said. “I wish I could see him hope for me one more time.”

“Francis was a young guy full of energy and full of life,” Raymond said. “He loved what he was doing and he loved the kids. He was a bright person, a great coach and a good guy. He will be missed by a lot of people.”

“Frank was always a good guy and had a big heart,” Wimberly said. “He always wanted to help someone.”

McDaniel was currently an assistant football coach at Phenix City and the seventh-grade Math Teacher at Phenix City Intermediate School. He was a member of the Phenix City High School coaching staff that won the Class 7A state championship.