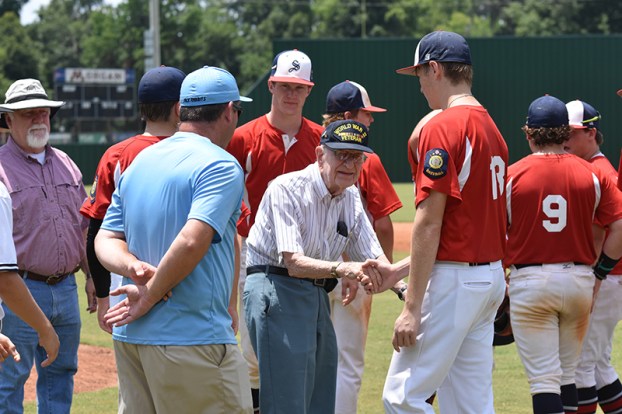 American Legion-sponsored youth baseball teams from across the region competed in the day-long tournament.

Post 20 team head coach Jerome Hand said he was pleased with the event’s turnout and enthusiasm.  The tournament was originally scheduled for June 8, but got pushed back to June 15 because of heavy rain.

“It went great,” Hand said. “The boys had a blast. The tournament was huge for the community and important for our boys to play baseball. We played tribute to one of the biggest days in American History, D-Day. We wanted to show our appreciation for World War II.”

“Tom enjoyed seeing the boys and they gave him an autographed baseball signed by all of the players,” Hand said. “We were thrilled to have him there.”

The Addison Bulldogs won the D-Day tournament, beating Post 128 of Centreville 6-5 in the finals.

The Post are currently 7-7, but Hand is encouraged with the team’s progress. The Legion state tournament will be held July 12-14 in Pelham.

“We’ve been competitive and lost a few one-run games,” Hand said. “They play hard. We hope to peak in time for the state tournament.”