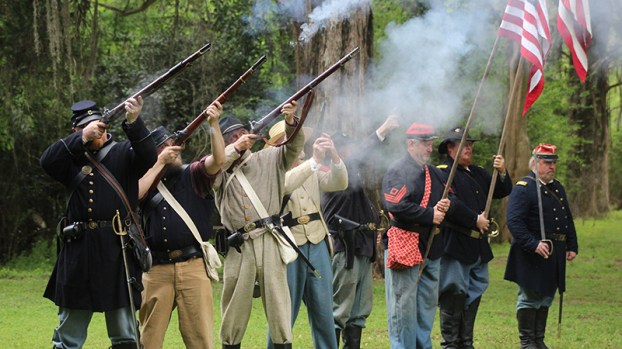 The unknown soldier’s memorial at Old Cahawba Archaeological Site was garnered with a wreath and flowers on Saturday as part of a memorial service for the unknown Civil War soldier.

“Our purpose of being here is a solemn one. We want to honor an unknown soldier, the POWs that were here and the POWs all over the world and there are many,” said Charles “Buddy” Perkins, a member of the Cahawba Advisory Committee. “This service and the idea to have a service came to me several years ago when I was walking around down here and I noticed there was a plaque over here for the unknown soldier. It occurred to me that we should contact the officials of the Battle of Selma group and ask them to add Cahawba to their activities. They came down here and had a service, and we’ve been doing this for six years now. Without their help, we never would have gotten this started.”

Linda Derry, the Site Director at Old Cahawba talked about the site of the prison, which is close to where the unknown soldier’s memorial is located.

“It was a very crowded prison,” Derry said.

Derry then introduced members of Selden’s Battery, who read journal entries and letters from soldiers who were held prisoner at the Old Cahawba site.

“Amazing Grace” and “It is Well With My Soul” was performed by Christian Weers and Nancy Zicardi.

Search of jail turns up cell phones, drugs and weapons