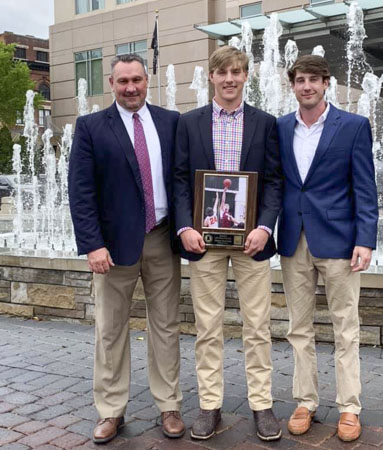 Gunnar Henderson can finally close the door on his prep basketball career at Morgan Academy.

Henderson, a selection to The Selma Times-Journal’s All-Dallas County basketball team, averaged 17 points and 11 rebounds a game and led the Senators to the AISA Elite Eight Tournament.  He was West MVP in the AISA All-Star basketball game.

“It’s a great honor,” Henderson said. “I give all the glory to God. I can’t thank my parents and coaches enough.”

“I knew Gunnar had a shot,” Knight said. “He’s a great athlete and a great kid. I’m so proud of him. Gunnar would’ve averaged 25 points a game if he had full games. He played a half in most of our games because we were so far ahead.”

Henderson will now focus on baseball. He’s an Auburn signee and potential high selection in the 2019 Major League Baseball Amateur Draft in June. The Senators (16-0) are ranked number one in AISA and favored to win a state baseball championship.