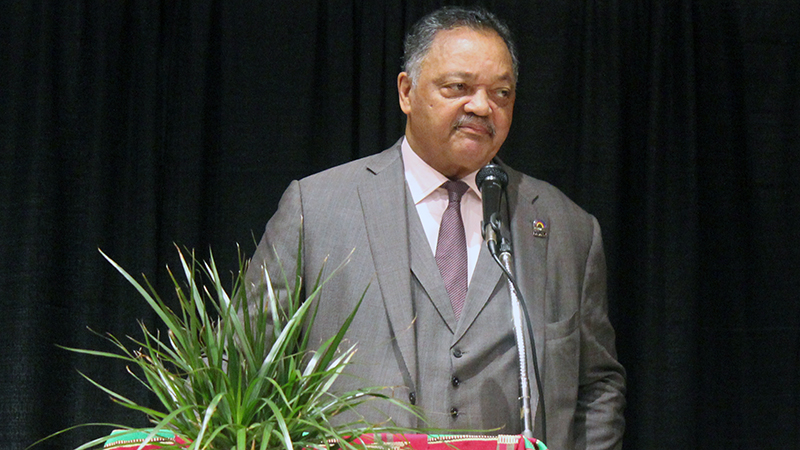 The Freedom Flame Awards was hosted Saturday night to honor icons of the Civil Rights Movement, both locally and across the nation.

The Freedom Singers kicked off the evening with “Woke Up This Morning” while people filed into the Carl C. Morgan Convention Center before Gospel Tabernacle Church of God in Christ Pastor John Grayson led the contingent in prayer.

Roland Martin, a professional journalist most widely associated with The Tom Joyner Morning Show, was master of ceremonies for the event, which he said was being broadcast live and viewed in the Bahamas and other Caribbean nations.

“The struggle you might have thought was over, it’s not,” Mitchell said during his remarks. “Stay woke.”

“Jubilee is more than a street festival,” Stewart said. “Jubilee is a remembrance.”

“We are not begging for justice,” Stewart said. “We are demanding it.”

Jackson referred to Selma as “the birthplace of our democracy” and called on national leaders to invest in and rebuild the city.

After another selection from The Freedom Singers, awards were handed out.

Three people received the “Igniters of the Flame” award – Leroy Moten, a civil rights activist who was in the car with Viola Liuzzo the night she was murdered by Ku Klux Klan members; Fannie Lou Hamer, a voting and women’s rights activist who organized Mississippi’s Freedom Summer alongside the Student Nonviolent Coordinating Committee; and Linda Lowery, a Selma resident and youngest person to march from Selma to Montgomery in 1965.

The “Passion of the Flame” award was given to Gwen Carr, mother of Eric Garner and an outspoken critic of police brutality; Valerie Bell, an opponent of police brutality whose 23-year-old son, Sean Bell, was shot 50 times by police on his wedding day; and Yusef Salaam, a member of the Central Park Nine.