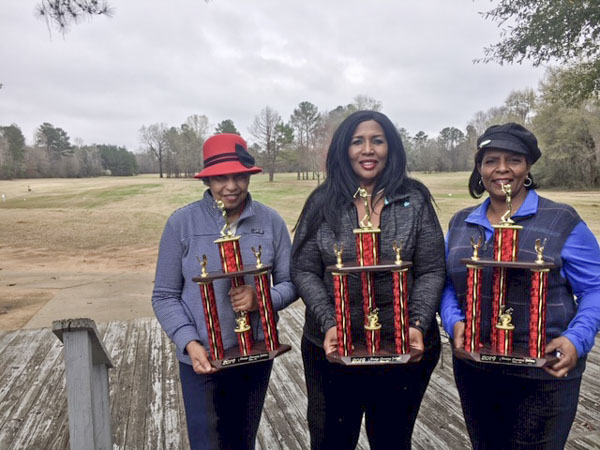 A trio of  women from Montgomery won the 14th annual Jubliee Golf Tournament on Friday at Valley Grande Golf Course.

The Selma alumni chapter of Kappa Alpha Psi Fraternity, Inc. has sponsored the tournament for the 14th straight year, an early event in the 54th annual Jubilee Bridge Crossing.

Margaret Wright, Olivia Gibson and May Boone, all from Montgomery, won the female division in the tournament.

The tournament only had four groups compete because the early morning rainstorm  limited the participation, but Kappa member John Solomon was grateful to those who showed up.

“We were hoping for a better turnout, but the weather held people back,” Solomon said. “But everyone who participated had a good time.”

Gibson said she was pleased with how her team hit the ball.

Larry Vasser, who runs the Kappa golf tournament, also said the weather affected the turnout. The tournament had a makeup date for March 8 in the event of bad weather, but they decided to play Friday.

“The rain turned a lot of people away,” Vasser said. “But the people who came out enjoyed themselves. It was a nice start to begin the Jubilee.”

Solomon said participation in the tournament  will only improve in the future.

“The Jubilee tournament is an annual event that we expect to grow every year,” Solomon said.

A semi-professional football team will make its debut in Selma on Saturday night. The Selma City Vikings will host the... read more