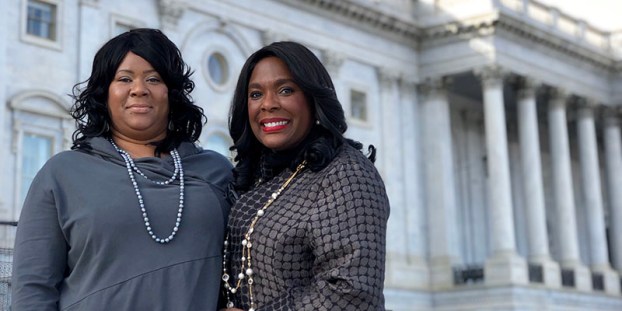 Rep. Terri Sewell, D-AL, stands with Tiphanie Carter, the wife of fallen Birmingham Police Department Sgt. Wytasha Carter, before the State of The Union address on Tuesday. Tiphanie was Sewell’s guest for the address. Sgt. Wytasha Carter was killed on Monday, Jan. 14 after responding to a car break-in. Another officer was injured during the shooting.

Sewell, legislators weigh in on SOTU

On Tuesday, all eyes were on Washington, D.C. as President Donald Trump delivered his State of The Union (SOTU) address.

“The President’s promises of bipartisanship and unity tonight ring hollow. Actions speak louder than words,” she said. “Over and over, the Trump administration has pursued divisive and destructive policies that have failed the middle class. The President has attacked people with pre-existing conditions and American’s right to health care. He has put corporate interests above those of working families by passing the GOP tax scam and denying federal workers their hard-earned paychecks during the longest government shutdown in U.S. history. Day in and day out, the President has sowed a culture of fear and falsehoods and put his own personal interests above those of the American people. I am fighting every day to bring more opportunities and high-paying jobs to Alabama and I am proud to work with my colleagues this Congress on a bold agenda to deliver real results for the people of Alabama’s 7th District in a transparent, bipartisan and unifying way.”

Sewell also talked about Stacey Abrams’ delivery of the Democratic response to the president’s speech.

“Stacey Abrams’ response to the State of the Union is historic,” Sewell said. “She is the first black woman to ever give a response to the president’s speech. As a young, black female, Stacey is truly the embodiment of the voters who made their voices heard in the 2018 election. Her vision for a brighter America stood in stark contrast to President Trump’s divisive rhetoric.”

Abrams was defeated in the 2018 Georgia Governor race.

Rep. Martha Roby, R-AL, praised the president for laying out a vision.

“In his second State of the Union address, President Trump highlighted the economic success hardworking Americans are experiencing thanks to the implementation of pro-growth policies, including the historic tax reform overhaul. I was also pleased to hear more about his plan to work with Congress to reinvigorate our badly aging infrastructure, strengthen our military, bolster our national security efforts, improve care for veterans, and defend the unborn,” Roby said. “In addition, President Trump laid out his vision for our country’s future as it relates to enhancing border security and finally addressing our serious illegal immigration problem. Now, with a divided Congress, I was encouraged by his remarks about the importance of bipartisanship and working together to get our job done. I am eager to continue working with the Administration and my colleagues in Congress to deliver the results that the American people and Alabama’s Second District deserve.”

Sen. Richard Shelby, R-AL, also praised Trump’s agenda that he laid out during the SOTU.

“President Trump outlined a policy agenda that both parties can work together to achieve,” Shelby said. “During his first two years in office, the President has delivered on many promises to the American people, including signing historic tax reform into law, creating one of the strongest economies I have seen in my lifetime, and focusing on vital infrastructure projects.

While huge strides were made to address our nation’s most critical issues last Congress, I applaud President Trump’s dedication to solve the challenges still facing us today,” Shelby said. “It is imperative that we work to put our political disagreements aside in order to secure our borders with a comprehensive solution.  As Chairman of the Appropriations Committee, I will continue to work with my colleagues on both sides of the aisle to find common ground on this critical issue.

“As President Trump highlighted, we must strive to reach common sense solutions to pressing policy issues in the days ahead.  I plan to continue working to promote safe and legal immigration, protect American workers, rebuild our infrastructure, lower the cost of healthcare and prescription drugs, and prioritize our national security,” Shelby said. “ The President’s remarks this evening were inspiring, and I look forward to implementing policies that ensure the success and prosperity of the American people.  As he said tonight, victory is not winning for our party, victory is winning for our country.”

Twenty-eight total rifle-proof vests were delivered to the Selma Police Department (SPD) on Tuesday afternoon. This comes after a... read more