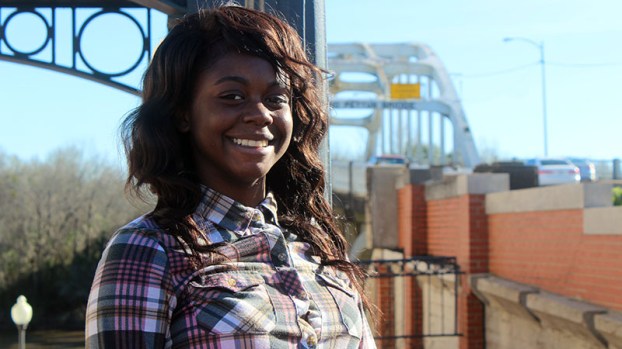 Malaka Lewis, a 10th grade student at Dallas County High School, has been nominated as a delegate to the Congress of Future Medical Leaders.

The Congress will be held in Lowell, Massachusetts from June 23 until June 25 and Lewis plans to be there.

“I know this will be an important part of my future and I am honored to be selected,” Lewis said. “The experience that I’ll gain from this trip will inspire me as I continue to study and learn.”

“I plan to be a neonatal doctor and attend Kennesaw State University,” the ambitious honor roll student said. “I am passionate about this goal and am determined to accomplish it.”

While Lewis notes that she wants to be able to work in a field dedicated to saving the lives of babies, she has a personal reason for pursuing a career as a neonatal physician – her sister was born with Treacher Collin Syndrome and only given three years to live.

“Today, she is a standing miracle,” Lewis said. “Every time I look at her, I just say to myself, ‘You were supposed to be gone but you are here.’”

Her sister will turn nine on Jan. 19.

“I want to be part of the miracles that save children’s lives,” Lewis said. “I am inspired and determined to be someone [that will] be a help to others.”

While attending The Congress, Lewis will have the opportunity to meet similarly inspired young people and hear from Nobel Laureates and National Medal of Science Winners; she’ll be given advice from Ivy League and medical school deans about what to expect in medical school; and hear from patients who are “living miracles.”

“This is a crucial time in America where we need more doctors and medical scientists who are even better prepared for a future that is changing exponentially,” said Executive Director of the National Academy of Future Physicians and Medical Scientists Richard Rossi in a press release. “Focused, bright and determined students like Malaka Lewis are our future and she deserves all the mentoring and guidance we can give her.”

Lewis’ nomination letter was signed by Dr. Mario Capeechi, Nobel Prize winner in Medicine and Science Director of the National Academy of Future Physicians and Medical Scientists. She was chosen to represent Dallas County because of her “academic achievement, leadership potential and determination to serve humanity in the field of medicine.”

Exhibit on display at Old Depot

On a series of oversized panels, the Alabama Humanities Foundation’s Bicentennial Exhibit tells the story of Alabama, from the formation... read more