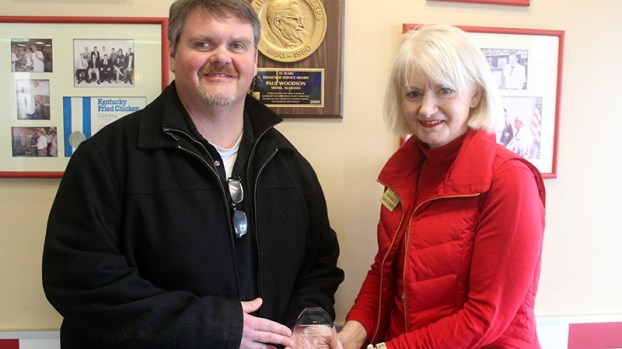 On Wednesday, Selma Dallas County Chamber of Commerce Executive Director Sheryl Smedley presented Mark Woodson, owner of the Selma KFC on Highland Ave., with an award from the Business Council of Alabama (BCA) and the Alabama Chamber of Commerce Association for being a finalist in this year’s statewide “Small Business of the Year” competition.

“It’s a great honor to present this to my friend today,” Smedley said before embracing Woodson.

“It’s a great honor to even be considered,” Woodson said. “We’ll work harder and maybe we’ll win next year.”

Woodson’s location was nominated in the 11 to 50 employee category and Smedley applauded him for his hard work throughout the community.

“I’m just the chicken man,” Woodson said with a laugh.

Although being humble, Smedley noted that Woodson is active in the community and has helped out at all of Selma’s schools.

Woodson’s father, who wound up in Selma through the military and worked as head of Air Traffic Control at Craig Field for a few years, opened the Selma KFC in 1970, which moved to its current location in 1991.

The original location was even visited by the famous Colonel Sanders in the 1970s. The closest Woodson ever got to meeting the Colonel was through a photo taken of his mother when she was pregnant with him.

Woodson joked that people have asked him when he plans to pick up shop and move to the beach, but the local entrepreneur has no interest in anything of the sort.

“This is my home,” Woodson said. “I’m here for the long run. You have to take care of your home.”

The expansive campus of Concordia College is like a ghost town since the school announced last month that it would... read more