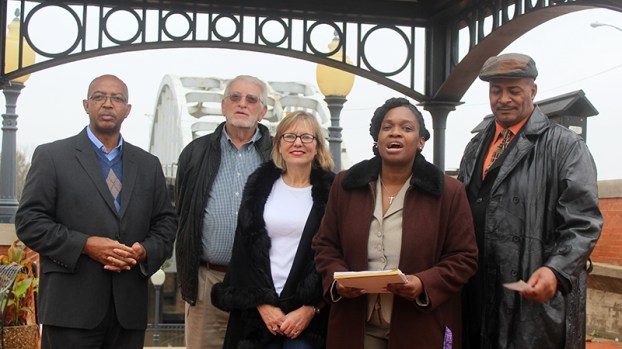 During a press conference at the foot of the Edmund Pettus Bridge Friday, Sen. Malika Sanders-Fortier (D-Selma) called for the community to come together and help city workers who were laid-off last month.

“We have a heart of compassion for the workers who lost their jobs,” Sanders-Fortier said. “We’re just trying to rally the community together to come together and help out.”

Sanders-Fortier, in conjunction with area churches and leaders, is launching her “12 Days of Christmas” initiative, which aims to raise $1,000 a day between now and Christmas to go toward helping struggling families.

“We want to make sure these children wake up on Christmas day and have gifts and Christmas dinner with their families,” Sanders-Fortier said. “We know the city has had issues, but this is something we should all be able to come together for.”

Sanders-Fortier is specifically calling for the community to get behind the ongoing efforts of Gospel Tabernacle Church of God in Christ, which has offered a bevy of services to the laid-off workers since they lost their jobs in early November.

The church has also partnered with Miami restaurateur Samantha Delgado to collect toys for children of the laid-off workers. So far, the church has collected about 20 bicycles and 20 tablets.

“We want every kid to have a toy for Christmas,” Grayson said. “We’re going to turn Selma into Bedford Falls. People came together and turned that whole city around.”

Grayson repeatedly referenced the holiday classic, “It’s A Wonderful Life,” while discussing the need for residents to unite to relieve the burden of some of the city’s most desperate citizens.

“If everybody does a little, none of us has to do a lot,” Grayson said.

During the press conference, Beloved Community Church Minister Franklin Fortier presented Grayson with a $250 check from his congregation.

“We just feel so compelled to say we’re concerned, we love you and we want you to succeed,” Fortier said.

Selma Councilwoman Susan Youngblood was also in attendance for the press conference and she and her husband, Dr. Lee Youngblood, made a donation to the effort.

Youngblood called on residents to contribute to the cause and assured those in attendance that the council is working to find a solution, with the intention of putting the laid-off workers back to work.

“No amount is too small,” Youngblood said. “We are all going to band together.”

Also in attendance was Ainka Jackson, Executive Director for the Selma Center for Nonviolence, Truth and Reconciliation (Selma CNTR), who assured those in attendance that she would be donating on behalf of the center and personally.

“Selma is a goldmine, but we’re so busy fighting over the dirt,” Jackson said, quoting something she’d heard before. “Selma, let’s get to work. We have what we need. People are suffering. If you have anything to spare, do what you would want people to do if you were in that situation.”

“The spirit of the season truly is giving,” Sanders-Fortier said. “It’s a rainy day, but we are the rainy-day fund.”

Donations can be made to the All Things Are Possible Foundation by contacting Gospel Tabernacle. The deadline to receive toys for children is Saturday, Dec. 22.

To contribute or sign up to receive assistance, visit the church at 1530 Lawrence St. or call 334-872-0888 or email the church at gospeltabernacleselma@gmail.com.

You can also contribute digitally at squareup.com/store/gospel-tabernacle-church or by searching for Gospel Tabernacle Church on givelify.com.

Despite the rain, construction began at the Prodigal Sons House in Selma Friday. On site were workers from Holbrook Ready-Mix... read more