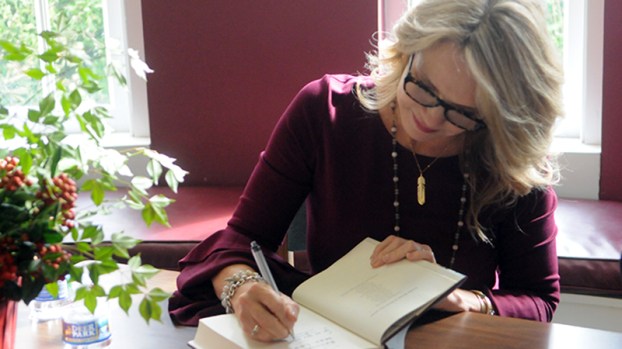 “It’s about books and giving people the opportunity to meet and hear from some of these authors,” said library Director Betty Nichols of the event. “But it’s more about bringing people together, that’s what the library’s all about. Fellowship and relationship building is what we do here.”

Henry sold and signed books and chatted with attendees before the oversized crowd gathered for lunch and a talk from the author.

Henry’s book, published under the name Patti Callahan because publishers were concerned that the book was such a departure from her earlier works, tells the story of Joy Davidman and her long and confused relationship with C.S. Lewis, famed writer of The Chronicles of Narnia and other celebrated works.

Henry is no stranger to Selma – she has been at the monthly book talk multiple times for previous works – and is a graduate of Auburn University, where she studied Pediatric Nursing. She later went on to earn a Master’s degree in Child Health and worked as a Pediatric Clinical Nurse Specialist.

After the birth of her first child, Henry began writing and published her first novel, “Losing the Moon,” in 2004. With the release of her latest effort, Henry has published 14 novels. Her sixth work, “Driftwood Summer,” appeared on the New York Times bestseller list.

While past books were strictly fiction, though inspired by real life experiences, her newest book is a work of historical fiction and relied upon an extensive amount of research and interviews. While the timeline of events in the book, as well as the characters’ personalities, are true to history, the inner-monologue and interpersonal dialogue have been imagined.

For her work, Henry was a finalist for the Townsend Prize for Fiction and a multiple nominee for the Southern Independent Booksellers Alliance Novel of the Year. Along with books, her work has been featured in a number of anthologies, magazines and other publications.

To learn more about Henry or to pick up a copy of one of her books, visit www.patticallahanhenry.com.