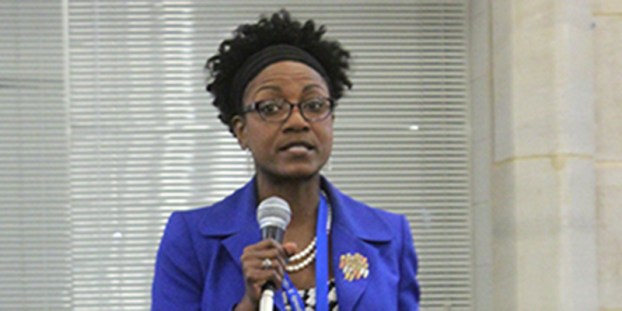 “As we’re making decisions, we are looking at how those decisions impact our students,” Williams said. “We want to make sure we’re offering a high-quality and equitable education to all.”

In order to achieve these goals, Williams recommended a series of efforts including stronger support for new teachers, establishing a “Parent University” to better involve parents in the education process, training for all school counselors on mental health issues and first aid, instituting programs to tackle bullying and possibly closing schools.

Though Williams declined to say which schools might be on the chopping block, she urged the community to attend the December board meeting in which a recommendation for school closures or consolidation would be brought forward.

Williams boasted that the school system has successfully begun the launch of its 1:1 program at R. B. Hudson Middle School and is on the way to making it a Science, Technology, Engineering, Arts and Mathematics (STEAM) academy. The school system is also more than $200,000 closer to reaching its goal of raising $1 million through grants and other efforts.

“We need to find funds and we need to be creative in finding those funds,” Williams said.

While Williams noted that the test scores were disappointing, she stressed that these tests were taken at the beginning of the year and she hopes to see those numbers increase dramatically by the Spring test.

“At the end of the day, our goal is to ensure that we’re improving educational outcomes,” Williams said. “We are working diligently and intentionally.”

During the question and answer portion of the evening, much of the conversation centered around gang violence in schools and what the school system is doing to curb that trend.

“The gang problem is not a school problem, it’s a community problem,” Williams said. “We’re working really hard to ensure our babies are safe at every school. We’re not the police, we’re teachers. We need your help and I am very open to suggestions.”

Williams noted that the school system is actively working with the police department to ensure school safety and urged those in attendance to maintain vigilance over their children and encourage the same in other parents throughout the community.