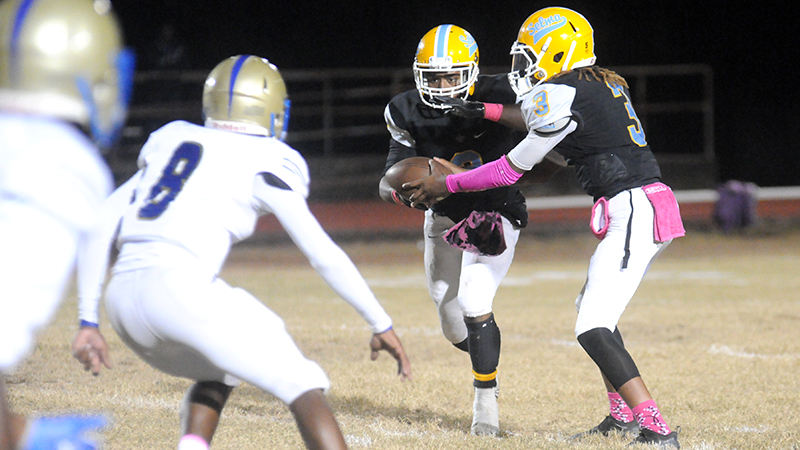 Selma High’s Amarian “Hulk” Molette takes the ball from quarterback Keondre Hope on a run play. Molette led the team with 157 rushing yards, and he scored a touchdown.

The Selma High Saints passed, ran and marched their way to a 60-14 win against the Aliceville Yellow Jackets on Friday night at Memorial Stadium.

Selma High hadn’t won a game since the season opener against Southside, and the Saints went all-in to end the seven-game losing streak.

“Tonight, we came out and played with a total team effort,” Selma High head coach Christopher Raymond said. “We did some great things tonight, and both sides of the ball played well. This is the first complete game we’ve played. It’s late in the season, but you can see the improvement in the team.”

A scoreless first quarter was just the warmup, but the Saints offense exploded in the second quarter.

Saints running back Nicholas Parnell scored his first of five touchdowns on his second carry of the game 28 seconds into the second quarter, and he scored the two-point conversion as well.

The Saints got the ball back immediately when Saints defensive back Corey Smith Jr. recovered an Aliceville receiver’s fumble.

The Aliceville turnover setup the Saints next scoring drive, and freshman quarterback Keondre Hope slung a 31-yard touchdown pass to Jakobe Robinson. The two-point attempt failed, but the Saints jumped out to a 14-0 lead in less than three minutes.

Hope had a decent night throwing the ball completing 50 percent of his passes(7-of-14) for 124 yards, three touchdowns and two interceptions.

“Hope has been making improvements day after day and he’s growing up right before our eyes,” Raymond said. “The good thing about him is that I have him for three more years after this season.”

The Saints drove the ball into the red zone again on its next drive, but Parnell made his first mistake of the game and fumbled the ball inside the 5-yard line.

Aliceville recovered and returned the ball to its own 30, but Selma’s defense forced a quick three and out.

Despite the turnover, Selma kept finding ways to feed the ball to Parnell.

“Coach Davis and coach Raymond told me to keep my head up, and I just put it back on the field,” Parnell said.

The running backs took over the ball game for the Saints. Parnell had 162 all-purpose yards to go along with his five total scores.

“Parnell is an outstanding football player, and he has the ability to do those things on a nightly basis,” Raymond said. “He played a heck of a football game tonight.”

Amarian Molette, who found the end zone later in the game, led the team in rushing with 157 rushing yards.

Parnell scored two more times before the half on a 10-yard run and a 13-yard reception, and he ran back the opening kickoff of the second half for an 80-yard return touchdown.

After the return touchdown, it turned into a blue and gold party.

Selma High’s marching band celebrated the touchdown by playing “Talkin Out the Side of Your Neck,” and then followed it up with Ella Mai’s “Boo’d Up,” when Aliceville’s kick returner fielded the ball inside his own 5-yard line and was tackled at the 1-yard line.

Aliceville burned its second timeout out of the half, while the cheerleaders and some of the players were still singing “Boo’d Up.”

Before tonight’s game, the Saints averaged only 23 points per game on offense, but Raymond kept the team in attack mode for the rest of the game.

Parnell got his fifth and final touchdown of the game on a 51-yard pass from Hope midway through the third quarter. The two-point conversion was successful and the Saints had a 52-0 lead.

Selma’s defense played lights out against the Yellow Jackets. The defensive unit forced three fumbles and recovered each of them. Smith Jr. recovered the first one. D’eric Robinson recovered the next one, and the last one was recovered by Joshua Grimes for a touchdown.

The Saints lost the shutout with 5:49 left in the third quarter on a 50-yard rush by Justice Craig. The two-point conversion failed, and Selma’s lead was cut down to 52-6.

The mercy rule kept the clock running through the fourth quarter, but the Saints still found a way to score again. Molette found his way into the end zone on a 17-yard run for Selma’s final score of the game.

The Yellow Jackets answered with a 77-yard kick return touchdown, but the Saints lead wasn’t in jeopardy as the time continued to tick away.

“It’s good to get back on the winning track,” Raymond said. “We have a great group of young athletes. They’ve worked their butts off– the record may not reflect the hard work they’ve been putting into it– but it’ll pay off.”

The Saints won’t make the playoffs this season and the win came against a non-region opponent, but the team was ecstatic to be back in the win column.

“The team was glad to win,” Parnell said. “We did it for the seniors.”

The Saints final game of the season is on the road in Mobile against LeFlore on Friday, Nov. 2.