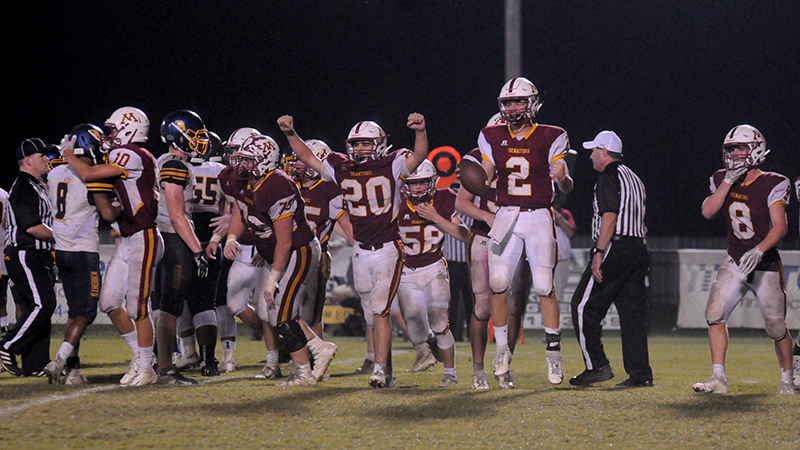 Morgan Academy’s Micah Pitts, who recovered two fumbles in Friday’s 24-21 win over Tuscaloosa Academy, raises his hands in victory after the quarterback kneel ends the game.

The No. 6 Morgan Academy Senators had to punt the ball back to the No. 7 Tuscaloosa Academy Knights with 2:48 left and a three-point lead on Friday night.

The Knights drove the ball down the field to the Senators 9-yard line, but a holding penalty with 43 seconds left pushed them back to the 18.

The Knights were well within their kicker Drew Scharfenberg’s range, and on fourth-and 18 with 10 seconds left, Tuscaloosa set up the field goal attempt to tie the game.

Morgan Academy head coach Josh Thacker stared from the sidelines with his head set in his hands. The fans from both teams held their breaths as the ball was snapped.

The kick was up.

The ball wobbled through the air and veered wide left of the goal posts and the Senators players couldn’t contain their excitement as they leaped in celebration of their 24-21 win.

“There’s zero quit in these kids,” Thacker said. “The heart has been here. The tradition has been here. We just got a bunch of guys that fight. The guys that came before them set it up, and it’s been a long time coming for this bunch to bring playoff football back to Morgan Academy.”

It was a historic night for Morgan Academy football.

This was the programs first winning season since 2011. The team finished the regular season with an 8-2 record.

“So many people doubted them and told them they couldn’t do it,” Thacker said. “They’ve done nothing but prove people wrong.”

The game itself was a dog fight.

The Senators defense, which has carried the team through the season allowing 11.3 points per game to opponents, forced five turnovers in the first half to slow down the Knights offense.

Morgan Academy defensive back Dione Allen forced a fumble that was recovered by his teammate Taylor Jones on Tuscaloosa Academy’s first play of the game.

“They got a great offensive football team that can really run the football,” Morgan Academy defensive coordinator Shaun Bonds said. “They hurt us some with some of the stuff they did in the Wing-T, but our guys just kept battling, scrapping and playing… I’m afraid if we didn’t get those five turnovers, then we wouldn’t be sitting in this position right now.”

Hardin Utsey forced the Knights to fumble again on their next possession, and Micah Pitts scooped up the ball for the Senators.

“We caught all the breaks tonight,” Utsey said. “When you catch the breaks and make plays on them, that’s what wins games. Defense won it for us with those turnovers.”

Tuscaloosa Academy put together a 78-yard offensive drive on their next possession, and this time they fumbled before they could reach the end zone and the ball rolled out of bounds for a touchback to return the ball to the Senators.

That was all before the first quarter ended.

The Senators leading rusher for the season Holt Utsey was sidelined with a leg injury, and finding room to run on the ground was difficult for the team.

Ingram was only able to rush for 29 yards on 15 carries against a stout Tuscaloosa Academy defense, and the team had just 57 total yards on the ground.

However, the Senators passing game was able to pick up the slack and make big plays.

“Tuscaloosa Academy is so well-coached inside and out, and we thought maybe we could miss-key them on some things,” Thacker said. “We’ve been saying it all year how great our receivers are and how great our quarterback is, and they shined tonight.”

His second touchdown pass went to Hardin on a 21-yard pass just before halftime to give the Senators a 17-7 lead.

Tuscaloosa Academy mounted a comeback in the second half as injuries hindered the Senators ability to move the ball with the same efficiency it did in the first half.

On the first snap of the third quarter, Morgan Academy’s starting offensive lineman Dylan Smith injured his right leg and couldn’t return to the game.

The Knights forced a quick three-and-out, and scored on its next possession on a 5-yard run by running back Phil Mcduff to make the score 17-14.

The Senators answered with a 68-yard drive that ended with Lee scoring on a quarterback sneak to give stretch the lead to 24-14.

Knights running back Cameron Chambers made up for his game-opening fumble with a 10-yard touchdown run early in the fourth quarter.

The Senators protected its three-point lead against three more offensive series against the Knights before they could celebrate.

“It was scary, but we got in there and said ‘I know we’re hurt, but we’ve got to toughen up and stop them,” Hardin said. “We prepped all week for this and it’s a huge win for us.”

Morgan’s game against Lyman Ward next Thursday was cancelled, so the Senators effectively have a bye week before the playoffs begin.

Morgan Academy will be the No. 2 seed and host a playoff game.