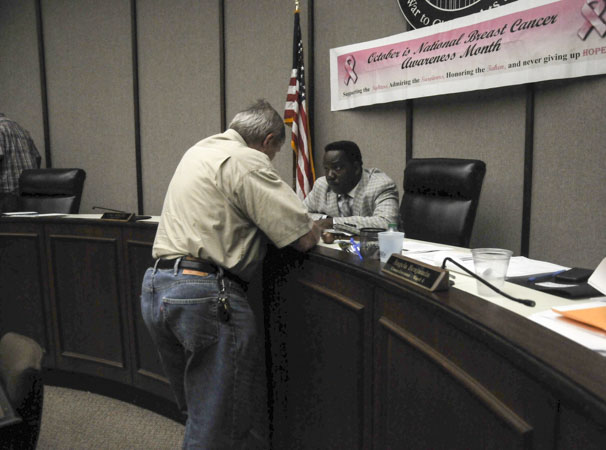 “I want Selma to be a no layoff city policy because I saw we were headed that way,” Randolph said. “We’re having the layoffs because of the Mayor’s vendetta. Our employees are citizens and taxpayers. I hate it when family’s livelihoods and emotions are involved. That’s not fair.”

“You can’t have a layoff policy if we don’t have money,” Leashore said. “It makes no sense. You have to look at where the finances are.”

Randolph shifted the blame back to Melton.

“The Mayor’s not the financial advisor,” Randolph said. “He has no business being in that office. I don’t understand the logic behind it.”

The second exchange occurred when councilman Michael Johnson questioned council President Corey Bowie about not meeting with Melton to discuss the finances.

“I talked to the Mayor Monday and he said he hadn’t talked to you,” Johnson said. “You and the mayor have to come together, that’s all I’m saying.”

“When you’re talking to an individual, you must have dialogue, not monologue,” Bowie said. “I tried to offer the olive branch, but he’s changed his number five times. The pendulum swings both ways.”

Bowie said he’s working on a solution, which will be unveiled at Friday’s 12:30 p.m. Special called meeting at city hall. He also said it will take $400,000 to make payroll.

“If you don’t shoot me in the back, I’ll show the way, that’s leadership,” Bowie said. “All I need is your vote.”

“Our responsibility is to the people and the city,” Benjamin said. “We need to make sure payroll is covered.”

Old Cahawba Archaeological Park was one of 10 sites across the state to receive a grant from Governor Kay Ivey.... read more