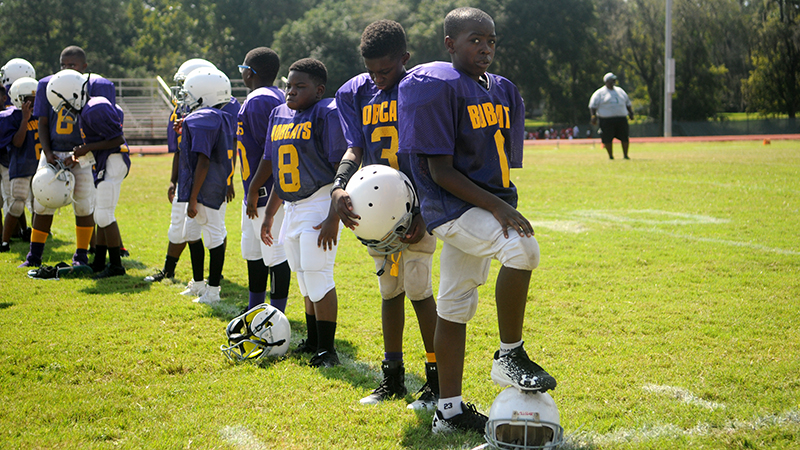 The Bobcats of the Selma Youth Football League at Memorial Stadium on Opening Day.

The layoff notices delivered by the city of Selma to 68 of its employees is sure to have a domino effect on the services provided by the city.

The Parks and Recreation department, which puts on the city’s youth football league, had 11 of its employees receive a layoff notice on Monday afternoon.

The layoffs go into effect at close of business on Monday, Nov. 5, which is right after the youth league’s regular season ends.

The last youth football league regular season games are scheduled for Saturday, Nov. 3, the weekend before the layoffs go into effect, which is also when the playoffs were scheduled to begin.

Parks and Recreation director Terry Jackson remains hopeful that the layoffs won’t last long, and said that the youth programs that the city puts on shouldn’t be affected.

“We’re going to finish the (football) season,” he said. “It won’t affect the playoffs. Hopefully, the layoffs don’t last that long, but as far as I know, everything will go the same. We’ll be ready when baseball season gets back in.”

Selma Mayor Darrio Melton spoke with Jackson and the rest of the Parks and Recreation staff on Monday afternoon when the layoff notices were delivered. The message Jackson received was that it was a short-term fix.

“Right now, it’s just a temporary layoff,” Jackson said. “Nobody was terminated, and everybody is supposed to be called back to work.”

Temporary or not, the layoffs leave a seed of doubt for the future of the employees, referees and the youth football league.

Curtis Wimberly, former baseball coach at Concordia College Alabama (CCA) and first-year football director for the Parks and Recreation department, received a layoff notice and is unsure of how it will affect the league and himself personally.

“The mayor also informed us that we probably wouldn’t get paid this week,” he said. “We hope for the best. But just based on what we were told yesterday in our little meeting with the mayor, we may not get paid our regular payroll this week and it may not get paid until next week. That’s a big effect.”

This past spring, Wimberly coached the final baseball game with CCA. He figured he could use his coaching experience to further help the city of Selma by joining the Parks and Recreation department, but the layoffs has put an expiration date on his newest job.

“It’s really difficult to put a grasp on it. Having just started, working 25 years with the school system and starting a new endeavor, you always wonder are you making the correct choice,” Wimberly said. “I don’t regret coming here because with my coaching background, I felt that I could give something back to the city in a positive way and effect some change with our youth at a younger age than I could at the high school level.

“The biggest effect will probably be insurance. Without an income, you can’t really afford insurance and it affects my family,” he said. “My wife is working, but I’ve always prided myself on being the bread winner for the family.”

The logistics of keeping the youth football league running was another uncertainty for Wimberly. The layoffs had an effect on the full-time and part-time staff members that keeps the operation running.

“It’s hard to say,” Wimberly said. “You don’t know how it is going to affect us. We had some good referees and personnel that come out to work. I’m not sure how they’re going to do it. Whether they’re going to volunteer or what? (The layoffs) could have an effect.”

The referees that call the youth league games are part-time employees, but they were notified of the layoff decision as well.

“They are a vital part to our program,” Wimberly said. “If we don’t have our referees, then we can’t necessarily go forward.”

Jackson said the referees would still work with the department going forward and the city youth leagues will continue as planned.

“They’re still going to work with us,” he said. “It won’t have an effect on our football and fall baseball programs.”