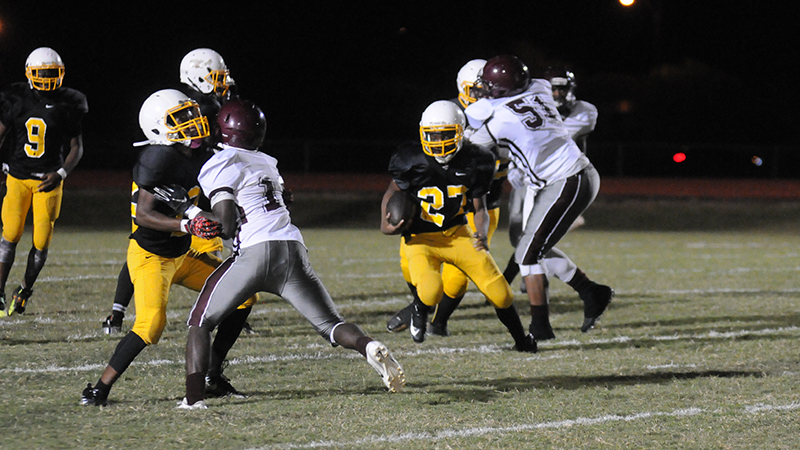 Ellwood Christian’s Kentrell Simmons cuts to the sideline and sprints 80 yards for a touchdown on Thursday night at Memorial Stadium against A.L. Johnson.

A fourth quarter meltdown spoiled Ellwood Christian Academy’s (0-7) Homecoming on Thursday night as they lost 56-30 to the A.L. Johnson Eagles (1-6).

Ellwood Christian scored a season-high 30 points and had a two-point lead at the end of the third quarter.

“We put up a fight, but we lost it in the end,” Simmons said. “I felt bad for the seniors. It was their last homecoming and we had to try to do something.”

Ellwood scored more in three quarters against A.L. Johnson than it had in its past nine games going back to last season.

“It’s good to be able to put points on the board, and that’s something we’ve been trying to do all season,” Ellwood head coach Migeual Catlin said. “I thought we did that tonight, but we had a bunch of mental lapses. If we take care of the small things, I think we’ll be alright later on.”

But in the fourth quarter, Ellwood’s errors compounded and A.L. Johnson took advantage of their mistakes.

“We shot ourselves in the foot several times,” Catlin said. “We have to learn how to finish a football game. We ain’t learned it yet and we’re trying to get that way.”

Ellwood drove the ball down to A.L. Johnson’s three-yard line on the following drive, but were stripped of the ball on an inside run play. Harris ran an 88-yard touchdown on the next play to make the game a two-possession game with 4:29 left on the clock.

Trailing 42-30, Ellwood fumbled again on the next drive when the center and the quarterback couldn’t connect on the snap. A.L. Johnson recovered the loose ball and created another scoring drive. Harris ran 61-yards to put his team up by 20.

Harris put together a highlight reel game with four passing touchdowns and 218 passing yards on 11-of-25 attempts and an interception. He also had 244 rushing yards and three rushing touchdowns against Ellwood Christian.

Ellwood players had lost the confidence that pushed them through the first three quarters. Dean took a knee on the first play of the next drive and walked off the field with just under a minute left on the clock. A bad snap on the next play went over the new quarterback’s head and A.L. Johnson’s Tarjan Mullen returned the ball 55-yards for the final touchdown.

There was 21 seconds still left on the clock, but before A.L. Johnson could attempt the two-point conversion, Ellwood conceded the game.

“It’s the same thing that’s been going on the last few years,” Catlin said. “They get down and they tend to stay down… They hang their heads, and it’s a constant battle to get them to understand that the game isn’t over until it hits zero.”

The loss places Ellwood Christian at the bottom of the Class 1A Region 3 standings as the only remaining team without a win. They face Isabella on the road next Friday, Oct. 19.

“We’ve got to grow up, get disciplined and take care of the football,” Catlin said. “We’ve got to establish ourselves on the line of scrimmage and get ready for Isabella. They have a good football team, and we’re going to have our hands full.”