“The importance of this game goes toward finishing No.1 in our area,” Meadowview head volleyball coach Tim Burton said. “That’s what we want to do. If we finish No.1, then we host a sub-state game and finishing No. 1 is always good.”

Marengo Academy challenged the Trojans at the net for the first three sets. The Trojans fought their way through the first two sets, and looked like a different team in the third set.

Marengo’s timeout late in the second set shifted the momentum. They were trailing 17-21 before the timeout, and snuck back into the game. The Lady Trojans barely hung on to its 2-point lead, but were able to finish off the set. 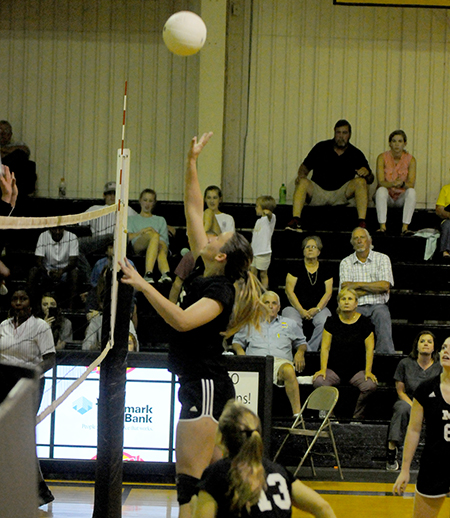 Meadowview’s Alyssa Verhoff rises up to tip the ball back over the net for a point in the win against Marengo Academy on Wednesday.

“Between the second and third game, I think my girls went outside and swapped bodies with somebody else,” Burton said.

Marengo’s momentum, however, carried through the third set when the team scored 10-straight points before Meadowview got on the board. Marengo attacked short when the Lady Trojans were too deep, and then hit their spots deep in the court when Meadowview tried to adjust.

Marengo Academy survived the win-or-go-home set with a lopsided 25-9 score.

However, Meadowview found themselves in the final set and flipped the score back on Marengo Academy to win the game and the match.

“They came back in the fourth set and took care of business,” Burton said. “We played as a team, and that’s what I fussed at them about in the third game… My two big hitters (Erin McIntyre and Alyssa Verhoff) were really on point in the first, second and fourth game. They were really getting some good shots.”