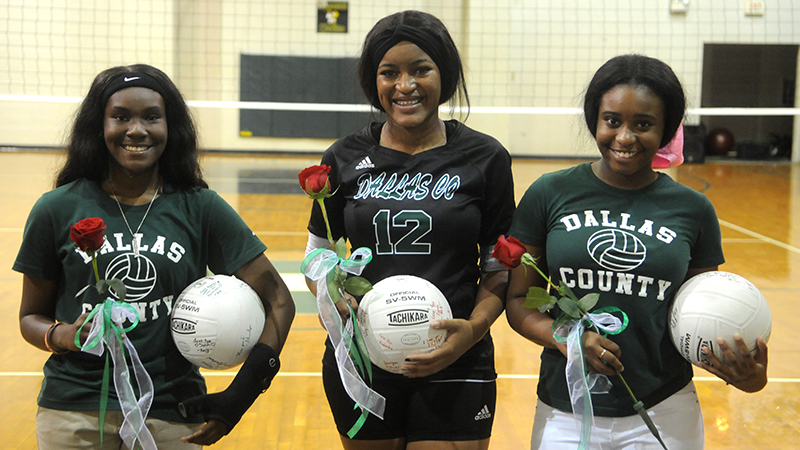 The Dallas County Lady Hornets volleyball team recognized its seniors on Tuesday afternoon before the match against the Southside Lady Panthers.

Team managers J’Kiera Peterson, Terrika Royal and the only senior player Zantia Friday received a rose and a gift bag in front of their teammates and their fellow classmates in the stands for their last regular season home game.

“The seniors have been a great help to the team,” Dallas County head coach Kierra Armstead said. “Zantia has been a great leader. She’s been our captain this year. She’s done very well motivating the girls and telling them what they have to do. Our managers have been great helping us out with the balls and getting our games together. Anything I needed, they were there.”

“For being my last game, I hate that we lost,” Friday said. “I really enjoyed my season because I take the girls as my family. When we get down here, we act like family, play like family and I’m glad to have played with this team.”

However, the game, which was scheduled for 1:30 p.m., didn’t get started until 2:15 p.m. because the referees were late.

The Lady Hornets and the Lady Panthers had completed their warmups and everyone in the gym waited 37 minutes before the referees entered the gym.

“I wanted them to know that Breast Cancer Awareness Month is a very important month,” Armstead said. “We wanted to represent and support the people with breast cancer. We didn’t want to put that aside. We want to be a part of it.”

Even though the girls had a delayed start, Dallas County’s Karly Bennett opened the game with an ace. The Lady Hornets fell behind midway through the first set, and the Lady Panthers took advantage. Southside won the first set 25-16.

The Dallas County students and fans provided a boost that turned the game around in the second set.

“I think their classmates kind of motivated them,” Armstead said. “They yelled and rooted for them. They were hyped about that and felt the energy in the room.”

But since the game started later than scheduled, the stands emptied at 2:48 p.m. with only a few points to go in the second set. The bell signaling the rest of the students to head home, left only a few spectators, the two teams and the referees in the gym for the rest of the match.

The Lady Hornets fell behind quickly 10-1 to start the third set, and Southside’s Jasmine Smith finished the set off serving the final three points to win 25-15.

The Lady Hornets couldn’t find the rhythm that pushed them to win the second set again, and the Lady Panthers were able to take the fourth and final set 25-17.