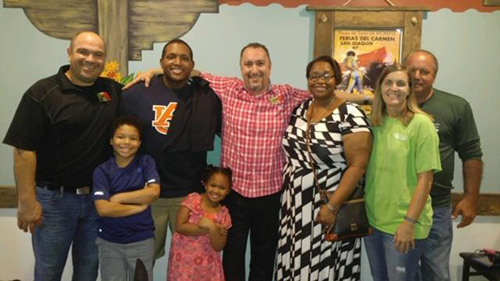 Two hundred bikers across the state appeared at a benefit for Selma Police Department (SPD) officer Micah Hale on Sunday at the Valle Grande Mexican Grill.

Hale, who appeared with his wife and children, thanked everyone for their support.  Gift certificates and cakes were the items donated for the event.

“I’m so thankful for the outpouring of love and support I have received from our community,” Hale said. “My family and I appreciate everyone’s prayers, thoughtfulness and generosity. I look forward returning to work so I can protect and serve our community.”

Dallas County Sheriff’s Office (DCSO) Deputy Ronnie Terry came up with the idea to help Hale, who was his former co-worker at the SPD.

“Micah looks like a muscle-building dude, but he’s a gentle giant,” Terry said. “He’s a fine man. I’ve been through what he’s going through. Anytime you’re involved in a shooting, you have to take time off work.”

Sanchez said he enjoyed watching the DCSO and SPD unite to assist Hale.

“It was great to see everyone come together like a family,” Sanchez said.

“We all came to support officer Hale and his family,” Homestead manager Rebecca Walker said. “We tried to come together for the city.”

Two of the bikers­ reside in Selma- DSCO officer John Treherne and Patrick Leashore- both were honored to participate in the bike ride that began on the Edmund Pettus Bridge and ended at the restaurant.

“It’s awesome to see everyone come out for law enforcement,” Treherne said. “They support the law enforcement who put their lives on the line for them.”

“It’s a good thing that everyone can support a tragedy,” Leashore said. “The city of Selma needs help and prayers. They need to put together more events like this and bring Selma together.”