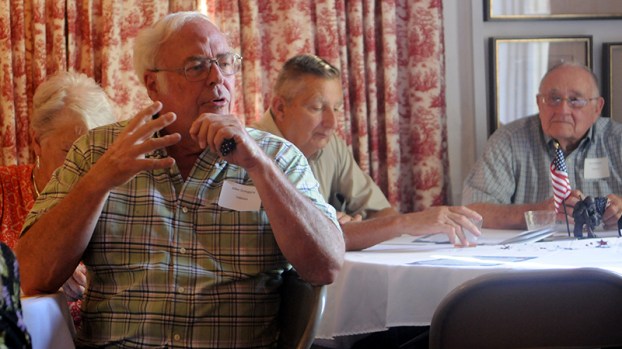 The United Daughter’s of the Confederacy (UDC) Selma chapter 53 honored the veteran service members from World War II, the Korean War and the Vietnam War on Wednesday afternoon at the Vaughn-Smitherman Museum.

The veterans and their family members were treated to a lunch inside the museum surrounded by old artifacts and historical documents from the Civil War period.

Even though the room was hot because vandals stole copper wire from the museum’s HVAC unit, the veterans enjoyed the opportunity to be recognized for their service.

Pat Godwin, president of the UDC Selma Chapter, invited as many veterans as she could contact in order to honor them at the reception.

“This is our seventh annual event honoring the veterans of the Selma-Dallas County area and some from our surrounding border counties,” she said. “We wanted to honor our veterans while they’re living. It’s our community patriotic outreach project.”

As the number of participants that were WWII veterans began to decline through the years, the UDC Selma chapter began inviting the veterans of the Korean War and Vietnam War so they could be included and recognized as well.

“There are some that were here last year with us, but aren’t today,” Godwin said. “We started out just honoring the WWII veterans. We had as many as 28 WWII veterans when we first started this, and this year I mailed out about 12. We’ve lost that many in seven years.”

The program was designed to give the veterans an opportunity to share their stories and experiences from their service time.

“We feel like the veterans are the historians,” Godwin said. “They tell their story and we just open the floor for them to share anything they’d like to with the group. The stories that they have shared through the years has been such an education. That’s the best way to study history.”

Pete Edwards was the oldest veteran in attendance at 98 years old, but he had to step out before he could be recognized for that achievement.

So the UDC Selma chapter honored James Winfred Brown, born on Feb. 10, 1922, as the oldest veteran in the room with a gift bag.

Throughout the reception, music from the World War II era played softly from the back of the room. Todd Kiscaden of Monteagle, Tennessee, brought his collection of CDs to play some of the popular songs of the times.

Kiscaden took a trip to the Imperial War Museum in Duxford, England, ten years ago where he saw the music for sale in the gift store. When the UDC hosted its inaugural reception for WWII vets seven years ago, Kiscaden started playing his collection for the veterans who served while the songs were at their height in popularity.

“No matter what age you are, music that you heard when you were growing up when you hear it later on it takes you back to that time and the memories come right back,” he said. “I think that’s what it does for our World War II veterans.”

Each veteran received a certificate from the UDC.

“It’s a thrill to see the older ones here. I’m one of the younger ones,” John Haskell an Army veteran of the Vietnam War said. “The other one’s 80 and 90-years old still walking around and sharing what they went through in World War II and the Korean War. If you ain’t been in a war, you don’t know what it’s like, so it’s something you’re proud of. I’m proud to have served the country, and I think you’re a better person by doing something like that.”

The veterans enjoyed the event and the UDC Selma chapter welcomes more veterans to join them and be recognized in the future.

“They tell me that they love this event,” Godwin said. “Some of them have very interesting stories to tell, and some of them are purple heart recipients but they don’t like to brag about that. They’re very humble about their heroism.”

Clay Carmichael has been dedicating his time to the BlackBelt Benefit Group for more than eight years. He said the... read more