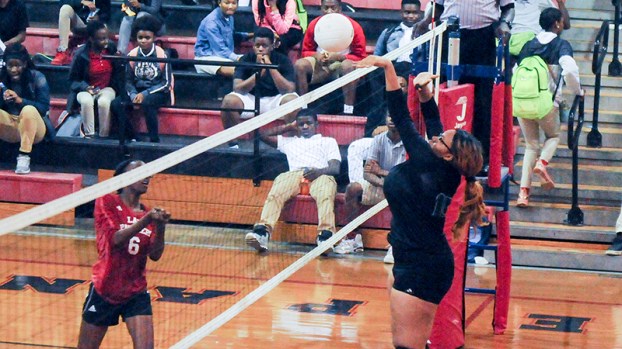 Dallas County’s Sherilyn Briggins tips the ball into a soft spot in Southside’s defense during the four-set win on Tuesday afternoon.

“We hustled, moved, got to what we were supposed to get to and we deserved the win,” Lady Hornets’ first-year head coach Kierra Armstead said.

Southside students came out to support the Lady Panthers in the match against the cross-county rivals.

The Lady Hornets struck first and won the first set 25-12. The match got off to an early start, and the quickest set of the afternoon was over before the originally scheduled 1:30 p.m. start time.

The Lady Panthers took the court without two of their usual starters, so head coach Samantha Henry had to make adjustments to her lineup for the match.

“The biggest thing  was miscommunication, and I’m missing two girls,” Henry said. “We just tried to adjust with what we had under the circumstances.”

After the first set, the Lady Panthers looked more comfortable on the court together and challenged the Lady Hornets in the second set.

The rivals traded points back and forth, but the Lady Hornets pulled away at the end and one the second set 25-23. The Hornets benefited from hustle plays that kept points alive for them during the match.

“Zantia Friday and Karly Bennett did really good,” Armstead said. “They really hustled and got every ball they were supposed to.”

The competition intensified as the Lady Hornets were one set away from sweeping the Lady Panthers on their home floor. 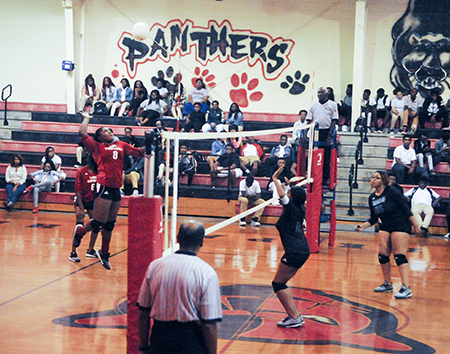 Southside’s Destiny Davis gets up for a powerful spike against Dallas County on Tuesday afternoon.

“They actually froze after seeing a good player on Southside’s team,” Armstead said. “So, they just got frustrated but they got through it.”

However, Southside found a rhythm in the third set and won it 25-17 to extend the match. The survival game got the crowd into the match and the Southside fans began a “Let’s Go Southside,” chant before the fourth set started.

The fourth set came down to the end. The Lady Hornets had a quick rally to get to match point, but were unable to seal the game on their service.

Southside’s Destiny Davis went back to serve and give her team a chance to extend the match. She gave the ball a big hit after her usual running serve, but the ball hit the top of the net and fell back to Southside’s half of the court.

The Morgan Academy football fans came out in full force this past Friday night to watch the Senators defeat the... read more