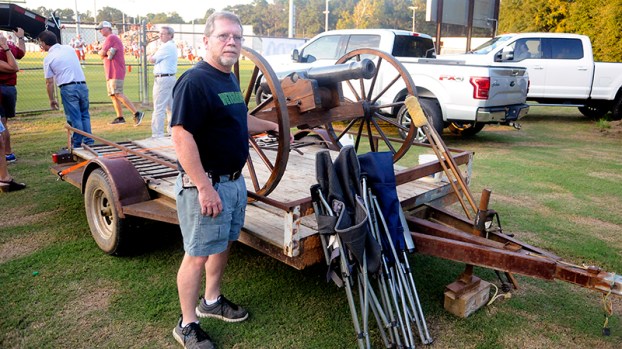 The Morgan Academy football fans came out in full force this past Friday night to watch the Senators defeat the Glenwood School Gators.

Behind the south end zone, tailgaters brought the party to the game. Wings and sausages were cooking on the grill pit. Fans planted their lawn chairs on the extended trailer so they could watch the game over the end zone fence.

But the newest addition to the Morgan Academy experience was the restored Civil War era cannon that Steven Criswell brought to the game.

Morgan Academy head coach Josh Thacker had been promoting his team on Facebook and pushing hard to develop a stronger fan atmosphere for his teammates.

“On Friday night, we sent out a call to all alumni, citizens of Selma and anybody who had anything to do with Morgan Academy’s past, present or even future and asked them to come out and support our kids,” Thacker said. “We opened the door on Friday night for people to come out, and there was a spirit line that stretched out past the 50-yard line, the cannon going off and music being played. The students and the parents were involved, and our guys fed off of it. That’s what carried our guys through the game on Friday night.”

When the idea of bringing the cannon to the game was introduced to Thacker on Thursday, he wasn’t sure how serious the proposal was.

“On Thursday, I got a phone call from a fan asking if it would be OK if they brought a cannon and I just kind of chuckled and said ‘Sure,’” Thacker said. “Turns out they were being serious, and it was such a welcomed addition. I think the fans loved that more than they loved anything else. People were talking about the cannon all weekend.”

Criswell found the cannon on accident and turned it into his own restoration project.

“I actually found the barrel when I was cleaning up in a lady’s backyard, and I kind of tripped over it,” he said. “She told me if I would rebuild the cannon to where it would shoot again, then I could have the barrel.”

He took the woman up on the offer and rebuilt the cannon by hand using old lumber he found at Craig Airfield.

The three-quarter scale artillery cannon was mounted on two large wheels facing away from the field.

A football parent, Travis Wilson, went the extra-mile in inviting Criswell and his refurbished cannon to the game.

“Wilson contacted me and asked if I’d bring it out and shoot it when they break through the banner and each time they score a touchdown,” Criswell said.

The cannon missed its first few chances to celebrate the Senators.

But when Holt Utsey scored a 4-yard touchdown in the fourth quarter to regain the lead against the Gators, the cannon boomed for the first time.

The fans in the tailgate section and the stands cheered for the 15-14 lead and louder for the teams’ newest toy.

The Senators and the Gators were in a dog fight the whole night, but the canon sounded off again in the final seconds of the game after Dione Allen returned a blocked field goal for a touchdown.

The Senators (4-1) take its four-game win streak on the road to play against Success Unlimited on Friday, Sept. 21.