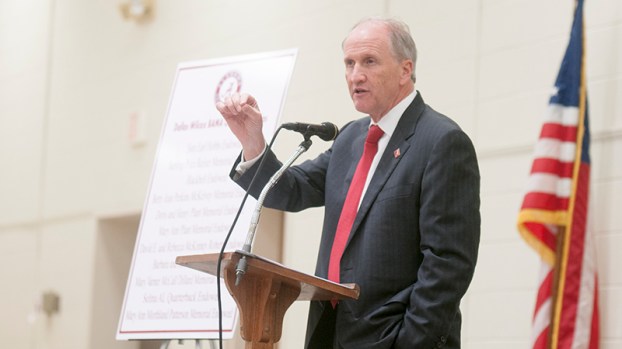 The Crimson Tide faithful in the Dallas-Wilcox Bama Club were treated to a special evening on Wednesday night at Carl C. Morgan Convention Center where university president Dr. Stuart Bell and Chris Stewart of the Crimson Tide Sports Network were the guest speakers for the evening.

“It was a wonderful atmosphere,” Bama Club committee member Ronnie Leet said. “Certainly couldn’t have had any better speakers than the president of the university Dr. Bell and Christ Stewart, whose always a wonderful speaker. We’ve had an electric night with two extremely wonderful speakers.”

The night began with a social hour and a dinner which was preceded by a prayer to thank God for the national championships of the past, the championships to come in the future and of course to bless the food.

As everyone enjoyed their meal, Leet updated the audience on what the club has done for students. The scholarship endowment has grown to more than $800,000 and the club continues to provide opportunities for prospective Alabama students each year.

“That was the total of the principal of our 11 endowed scholarships,” Leet said. “In May, it was less than $800,000 and now it’s $830,000 and some change. We’re moving right along and continue growing to scholarship money to our area students.”

Bell recognized and celebrated the Bama Club for what they’ve done before getting into his speech.

Bell was named president of The University of Alabama in June 2015.

Bama Club committee member Buddy Perkins had been trying to get Bell to visit for Selma ever since he took office, and he finally got him this year.

Bell attends church at Calvary Baptist Church in Tuscaloosa, just a short walk away from Bryant-Denny Stadium. A connection through church members turned into Bell making a visit to Selma and speaking to the Bama Club.

“We (Bell and his wife Susan Bell) love to get out and visit our alumni, and Selma is a great place to come,” Bell said. “One of our church members said ‘My Uncle Buddy lives in Selma and we would love to have you guys come for an alumni event.’ That was about six weeks ago, so here we are.” 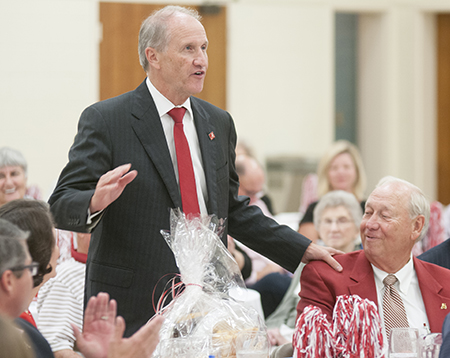 UA president Dr. Stuart Bell thanks committee member Buddy Perkins and the whole Dallas-Wilcox Bama Club for inviting him to speak at the club meeting on Wednesday night.

Bell discussed a variety of topics from student welfare, his relationship with the students and the constant improvements being added on to the campus.

“A great university like Alabama creates a great society,” Bell said. “We can have students who dream big. They come in and learn how to achieve their dreams. Whether they come back to Selma or they go to Birmingham, they are able to realize those dreams and impact communities around them … I’m always reminded when I go to hometowns, that this is where our great young people start.”

He hosts fireside chats for students at the president’s house on campus to get their point of views on campus life, and the recurring message he receives from them is that UA is home.

Bell was proud to announce that UA was the only school in the state not to raise in-state tuition. He also told the club about the 10-year $600 million “Crimson Standard” campaign that will raise money to improve Bryant-Denny Stadium, Coleman Coliseum and the other athletic facilities.

“It really is our donors that take our university to the level that we expect it to be,” Bell said. “It really is aimed at the athletic pieces, but know that we’re doing a lot on academics. If you’ve been on our campus recently, every year you have to get a new map because we just opened a new engineering facility, a new housing facility and a new dining hall just this summer. This new Crimson Standard is going to be a new investment in athletic facilities across the university.”

He said the improvements will help all of UA athletics and to help the students have the best chance they can to compete.

Bell also announced that UA was named the most beautiful campus in the state and No. 5 nationally.

He returned to his seat next to his wife Susan Bell at the main table after his speech was finished, and relieved the stage to Stewart to finish off the night.

“This group has always been very, very nice to me, and I love getting a chance to speak to Alabama alumni and fans,” Stewart said.

The voice of UA basketball and baseball opened with his testimony of surviving a stroke earlier this year.

In April, just two weeks before his 48th birthday, Stewart suffered a stroke while asleep in his bed. His wife Christy, whom he calls his hero, had gotten up at 4:30 a.m. to check on their kids when she noticed Stewart needed help. She called the paramedics, and Stewart woke up 14-hours later in a hospital bed.

Stewart survived the stroke, recovered well since the incident and still manages to sit face-to-face with Nick Saban and host The Nick Saban Show.

“I think it really helps for people to understand that the Nick Saban that they see on television, on the sidelines or even over the radio is that guy,” Stewart said. “He is so focused and locked-in on his job, but also I wanted to relay how he and his wife reached out to me and my family when I had my stroke. I wanted to make sure they understood just how kind and caring they are as people.”

Stewart transitioned from his personal story to focus on Alabama seamlessly. He shared how Nick and Terry Saban reached out to his wife Christy to check on them during his recovery.

As an Alabama native from Fairfield, Crimson Tide football has been a part of special moments in Stewart’s life. He remembered the first game his father took him to at Legion Field in Birmingham where Alabama played against Arkansas State. Many years later, Alabama’s first home game after his stroke ends up being against Arkansas State. 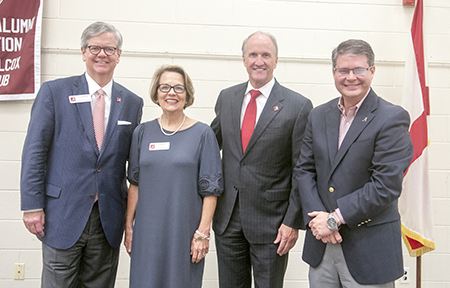 Ultimately, it was a fun and informative night for the Dallas-Wilcox Bama Club. The double-header speaker night was a great precursor to Alabama’s road game this week against Ole Miss.