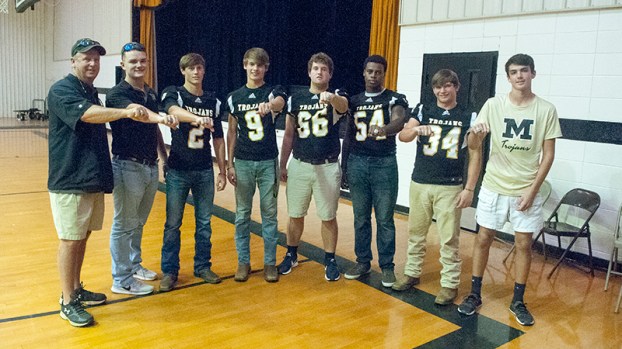 The 2018 Meadowview Christian Trojans baseball team made school history this past May when the team won its first state championship against Brooklane.

At the school’s pep rally this past Friday, the team was recognized in the school gymnasium for its historic accomplishment with a ring presentation.

After a brief introduction by school headmaster Bob Taylor, Meadowview’s head baseball coach Scott Gunter called out his players one at a time to receive their state championship rings.

“It’s a great feeling and they deserved it,” Gunter said. “They worked real hard. Two years ago, we finished third in the state and it was our goal to finish first. Our goal from day one was to win state, and that’s what they set their minds to. It’s been an honor coaching them.”

Not every player from the championship team was able to make it to the ring presentation, but Mason Kendrick, Zack Duke, Austin Little, Jack Barnes, Chemar McGuire, Alex Colquitt and Garrett Brech were able to put their rings on together in front of their classmates.

“It’s all about team,” Gunter said. “We had a great coaching staff. My assistant coaches were outstanding. It was just a group of great ball players and great guys.”

It was a memorable season for the historic team. Not only did they get the first state baseball championship in the school’s 48-year history, but also the only team in Dallas County to have won a baseball state title since the 1970 Dallas County High School team.

“We worked hard as a team,” Colquitt said. “I’ll remember how close the team was together, how hard we worked and all the effort we put in.”

The 2018 Trojans baseball team finished the season 19-5, and defeated Brooklane 21-2 in the ACA state championship game.

The team had rebounded from a third-place finish in 2017 to achieve their goal of winning the state title.

“Winning a state championship, not many people can say that,” Gunter said. “It’s just an accomplishment that we made, and we’re very proud of it.”

This upcoming season, the Trojans will play in the AISA. A different league, but the bar for success has been set.

In a room full of college football fans, former Auburn head coach Tommy Tuberville blended in like he was a... read more