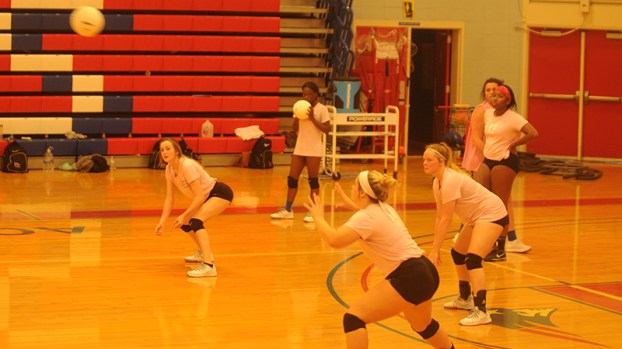 Wallace Community College Selma’s volleyball team runs through drills at practice on Tuesday afternoon before their next road game against Andrew College on Thursday.

The Wallace Community College Selma Patriots volleyball team was back in the gym practicing Tuesday afternoon as the team’s 2018 season is already underway.

WCCS head volleyball coach April Harper has a young team this season with only three sophomores on the roster. The nine freshmen make up the bulk of the roster, and Harper has pooled talent from across the state of Alabama.

“We have girls from all over the state of Alabama,” Harper said. “I went to a lot of big tournaments recruiting these young athletes based on what our needs were, and we needed every position filled.”

“The important thing is that they’re able to work together as a unit,” Harper said. “They need to be disciplined, continue to pass the ball to the right and communicate on the court. Hustle and heart wins games. If they can come focused for every practice, be disciplined in what they’re asked to do and be consistent in that, then we should have a good chance at winning some games this season.”

The team is looking to improve on last season’s results.

“Last season didn’t go as well as I wanted it to go based on the talent I recruited,” Harper said. “I’m always looking for leaders, stabilizers and closers. Although we had a lot of close games where we went to the fifth match, we couldn’t cross that finish line. I’m hoping with this new team that we have, a lot of them are from winning programs, that we will be successful this year and be able to cross that finish line.”

The team started the season with the Lady Patriots 3rd Invitational Tournament. Faulkner University, Southern Union, Lawson and Jefferson Davis came to Selma to play in the double-elimination tournament.

The day went smoothly and the teams played matches all day. Lawson ended up the champion of the invitational tournament, but the games gave each team a chance to measure where they are to start the season.

WCCS lost its first match to Lawson, but played much better in its second game against Faulkner.

“When you’re young, you don’t really know what to expect,” Harper said. “I think nerves got the best of them and they didn’t do so well for that first match against Lawson. Now, when we came back in and played the second match against Faulkner they did extremely well. They were competitive in the second match.”

The Patriots have a full season of games left in front of them with their next game being a road game against Andrew College on Thursday. Harper wants her team focused on playing consistent volleyball as they progress through the season.

“We need to play hard and consistent,” she said. “I never count my chickens until my eggs have hatched. I take it one game at a time, and I always remember that it’s never about the coach. The athletes are the ones that have to play the game and make the difference.”