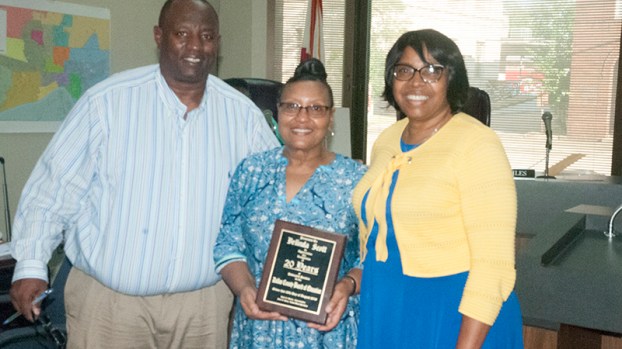 The parent claimed that on certain days when the weather was raining, the bus driver that was supposed to come to pick up her child for school would not travel down her road.

The parent claimed this caused the child to be late for class, and that truancy reports had become involved.

School board member Carolyn Bates said that the parent had called her as well.

“When it rains a lot, the bus cannot get up that hill,” said Shelton. “What the bus driver has asked is that on those mornings that the parent and her child meet the bus driver on the opposite end of the road where it is paved. We have spoken to the parent, and I spoke with her again after I rode that area.

“Even for me in a car it was difficult because the road is narrow,” said Shelton. “There are some places where it is washed out, and there is no place for the bus to pull over for oncoming traffic. It is slippery.

“Last year, that same bus got stuck, and it was stuck late into the night,” said Shelton. “It had children on it, and some of the children were very late getting home because we had to call parents to pick them up. It is more about the safety of the majority on that than it is just not trying to go and pick her child up.”

Shelton said last year, the bus ran off the road.

Shelton said the principal of the school the woman’s child goes to said the student had been excused for being tardy on those days.

Belinda Scott was honored for her 20 years of service with a retirement plaque.

The school board approved a meal price increase for the 2018-2019 school year. Shelton said this increase occurred across the state at the recommendation of the Alabama Department of Education. The increase was 50 cents.

Members of the community gathered for the No More Silence, End Gun Violence vigil on Saturday at Phoenix Park. The... read more