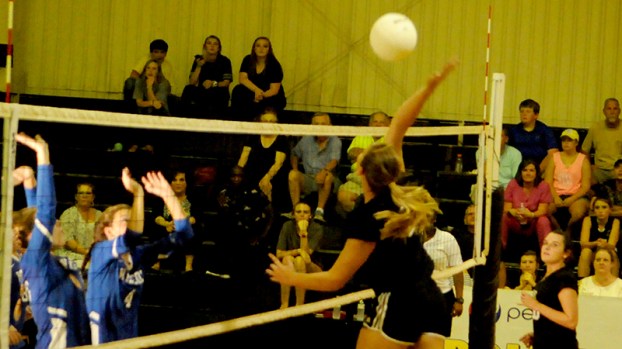 Meadowview Christian’s Alyssa Verhoff spikes the ball for a point in the Trojans win against Wilcox Academy on Monday night.

Morgan Academy and Meadowview earn first wins of the season

The Meadowview Christian Trojans volleyball team picked up its first win of the season Monday night at home against Wilcox Academy in straight sets 25-13, 25-9 and 25-11.

After dropping the season opener last week and a tough showing at the Cotton Classic tournament in Tuscaloosa this past weekend, the Trojans played significantly better according to Meadowview’s head volleyball coach Tim Burton.

“They came in, started playing and never got uptight,” Burton said. “They were happy throughout the whole game, and their serving was 10 times better than the weekend.”

Over the past weekend and before Monday’s game, Burton addressed his players about settling into the game.

“They all knew that they were kind of over-playing, and I had another coach step in who talked to them about trusting each other,” Burton said. “I think they did tonight. They didn’t step on each other tonight. They just sat back and let everybody play.”

Erin McIntyre and Baylee House were key players in the win against Wilcox Academy due to their serving ability.

“They both had real good serving nights,” Burton said. “They had strings of eight or nine or more.”

The game against Marion scheduled for Tuesday was canceled, but the team will be on the road Thursday, Aug. 30 to play against Evangel in Montevallo.

The Morgan Academy Senators volleyball team swept Fort Dale Academy 25-8, 25-15 and 25-10 on Monday night for its first win of the season.

“They played really well,” Morgan Academy head volleyball coach Kayla Thacker said. “They did things fundamentally sound and better than last game. They didn’t make very many defensive mistakes. As far as offensively, we didn’t do anything fancy. We didn’t try to do anything fancy.”

Mary Vincent Lewis had a good all-around game for the Senators, according to Thacker.

“She served well, set for us really well and put other people in a good position to be successful,” Thacker said. “She played great defense and also had several attacks outside of her position.”

The Senators face Pike on Tuesday at home. The junior varsity plays at 4:30 p.m. and the varsity team begins immediately after.