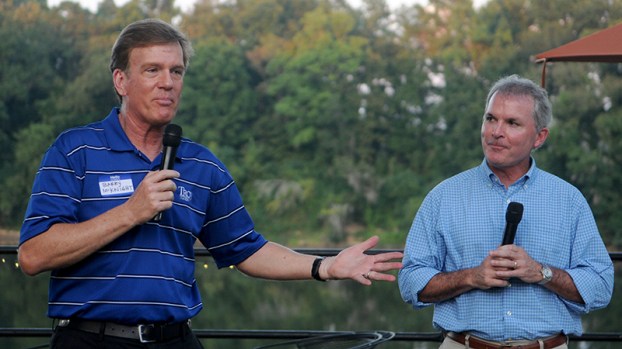 Barry McKnight (left) and John Longshore (left), co-hosts of the Budweiser SportsLine with Longshore and McKnight show on SportsRadio740 in Montgomery were the guest speakers at the opening Selma QB Club meeting on Monday evening at Julius Talton’s riverside home.

“It was a great kick-off, and we always enjoy the first night,” Selma QB Club finance chairman Forrest Hatfield said. “We had about 100 people here. Outside Mr. Talton’s place here is a beautiful setting, and it’s just a lot of fun.”

The co-hosts of the Budweiser SportsLine on SportsRadio740 in Montgomery were welcomed back to share their insights and opinions for the upcoming college football season.

“This is a great quarterback club,” Longshore said. “You can tell that these members really enjoy it and really want to support what is here in Selma. There’s a lot of clubs that we speak to and there’s not this many people, and you can’t beat this scenery.”

The QB Club had 100 people seated around Talton’s backyard pool for the event. They were catered to a barbecue dinner facing the bend of the Alabama River flowing by the house.

The burning question that’s been at the forefront of Crimson Tide fans’ minds since the confetti rained down on the 2018 national champions in Atlanta, was the first of many that Longshore and McKnight shared with the QB Club.

Both Longshore and McKnight predicted that Jalen Hurts would be the starting quarterback for Alabama when the Crimson Tide face Louisville on Saturday at Camping World Stadium in Orlando, Florida.

“I think [Jalen] has earned the right to start,” Longshore said. “I think the pre-season practices had a lot to do with it. I think there was a lot of feeling that Tua was going to come in, completely blow everybody away and be the guy. I don’t think that’s happened. I think Jalen has really fought for his position.

“I also think [Nick] Saban trusts Jalen, and trust is a huge thing with him,” McKnight said. “Jalen doesn’t turn the ball over. He plays toward their strengths.”

However, they left open the possibility that his teammate and competition for starting position, Tua Tagovailoa, could also get some game time and potentially win the starting job later on.

Choosing between a 26-2 starter and the 2018 College Football Playoff National Championship savior was the perfect introduction to breaking down the storylines for the SEC.

Longshore and McKnight also had high-praise for the Auburn Tigers as well.

The duo highlighted Auburn’s defensive line’s as having the potential to be one of the best groups in the school’s history. The team that defeated both the SEC Champion (Georgia) and the National Champion (Alabama) during the regular season last year, also returns their starting quarterback in Jarrett Stidham to lead the offense.

However, Longshore and McKnight also brought the QB Club’s attention to where the Crimson Tide and the Tigers could run into some trouble.

Longshore’s teams that could present trouble for Alabama was Missouri and Mississippi State. He selected Texas A&M as the game to be wary of for Auburn.

McKnight, who was high on Mississippi State’s defensive line, stated that the Bulldogs could be a challenge for both Auburn and Alabama.

Even though both schools are in the SEC West division, Longshore and McNight agreed that Auburn has the tougher slate of games this season. The Tigers have five Top-25 teams on the schedule this season with No. 3 Georgia and No. 1 Alabama just two weeks apart in November.

McKnight did predict, however, that the Tigers wouldn’t lose to both Georgia and Alabama.

“The one thing I wanted to get across to them, as much as anything else we did, is the fact that I think Auburn is being undervalued,” Longshore said. “They have such a good defense. They have such an experienced quarterback. I think the world of the potential of Jarrett Stidham. Everyone keeps bringing up the schedule, with good reason, but I still think that doesn’t negate the fact that Auburn is the most talented they’ve been under Gus Malzahn.”

Outside of the Auburn, Alabama conversation, the duo also touched on Troy football, the Urban Meyer suspension, and Alabama’s $600 million fundraising campaign to enhance Bryant-Denny Stadium.

Longshore and McKnight wrapped up their talk and opened the floor to questions from the club members. The sun had already set, but they could’ve completed a 3-hour show like they do on-air.

They enjoyed their return trip to Selma. Both speakers predicted Auburn and Alabama to win their season-openers on Saturday.

McKnight, who has called games for Morgan Academy, Meadowview Christian, Selma High and Southside in the past, is familiar with how much Selma cares about its community and its athletics.

Dinner, a view and football was the recipe for a strong kickoff to the Selma QB Club speaker series.

The QB Club will not meet on Labor Day, but will have its next meeting on Monday, Sept. 10 at the Carl C. Morgan Convention Center where former Auburn head coach Tommy Tuberville will be the guest speaker.