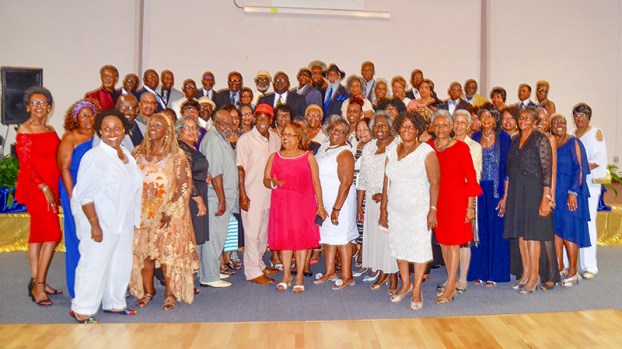 MEMORY LANE: R.B. Hudson class of 1968 posed for a photo at their class reunion on Saturday Aug. 4 at the George Evans Building.

R.B. Hudson High School, now R.B. Hudson Middle School, graduating class of 1968 celebrated their 50th class reunion during the first weekend in August. Classmates, who now live all over the country, joined together to celebrate and remember their time at the historical school.

The reunion took between eight to nine months of planning.

On Friday Aug. 3, the class went to Montgomery on a bus and had dinner and went on a cruise.

The following Saturday, Aug. 4, over 52 members plus family and friends gathered in Selma at the

The reunion was planned by a committee of eight classmates. Fellow classmate and organizer, Hattie Chambers-Givan, said the Class of 1968 was a close-knit class that was dedicated to and passionate about change.

“This class was instrumental in the Civil Rights Movement and had over half of our class march from Selma to Montgomery,” she said. “A lot of them were teargassed, beaten and locked up.”

She said throughout the years, the class exuded academic excellence.

“We prided ourselves on being the best that we can be,” she said.

R.B. Hudson Middle School was named after the late Richard Byron Hudson. Hudson was an educator for many years.  He was the principal of Clark School for 41 years and superintendent for some time. Givan said keeping the name “R.B. Hudson” means a lot because it represents a man that stood for academic excellence. She said she and her fellow classmates hope the name stays the same, as they are proud of what it represents.

“R.B. Hudson High is a part of history that took place in Selma,” she said. “We would like for it to remain Richard Byron Hudson because that represents those values he stood for,” she said.

Givan said she and her classmates are happy to hear about the new science, technology, engineering, arts and mathematics (STEAM) opportunities that the school is planning to start.