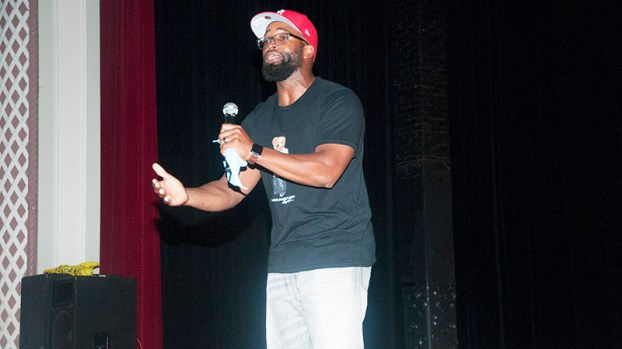 WORDS OF WISDOM: Minister Nathan Snow spoke to the audience about the importance of having a relationship with God.

Angela Fincher, president and CEO of Kingdom Talk Ministries said the purpose of the event was to raise the morale among of local youth, specifically young males.

“If we can just win one person over to God’s side then we’ve done our job,” she said. “If we can just impact one person and one child to have a life change, then that’s what it’s all about. That’s how we’re gonna save the city.”

Fincher said ministers Nathan Snow, George Burton and the other guest speakers give the youth hope because they can relate to them.  She said the youth should know that it’s not about where they come from but where they will be headed in life.

“You have to plant something in them that will eventually grow,” Fincher said. “They are gonna see that the ministers and rappers that are coming before them are relatable. Once you can relate to a thing you can see yourself doing that thing.”

Snow said instilling self-worth and love for Jesus Christ was the basis of his talk with the youth. He said he wants them to understand that by believing in themselves they can overcome a lot of things that may come their way.

“I want to inspire them to know who they are in God, and know their quality,” he said.

Snow said he speaks about the Bible to the youth, but he makes his messages relatable to them.

“I make it more real to them and make it more personal,” he said. “I [tell them] what I wanted to hear as I was growing up and I try to shape it to them so they can understand what’s really going on in today’s society.”

Burton said after many years of a life of crime he turned his life around and found God while serving a 14-year prison sentence.

“God allows me to use that experience, like what Joseph went through. He took what the devil meant for evil and turned it into good,” Burton said. “I overcame the recidivism rate. I’ve been out three years, started out on minimum wage and now I own my own trucking company.”

Burton believes that teaching young people not to value the temporary things in life, but instead put value into life-long things is a huge part of growth and a key to staying on the right path.

“I really just want to open their eyes and understanding to how important it is to treasure the things that are going to have a lasting affect instead of the temporary things,” he said.

Lite the Block is free and open to the public. The second day of the event will continue on Friday, Aug. 24 at 6:30 p.m. at the School of Discovery.

Open House at the Bloom House

When Kristen Jones founded the Bloom House, she had one major goal in mind: to help vulnerable children know and... read more