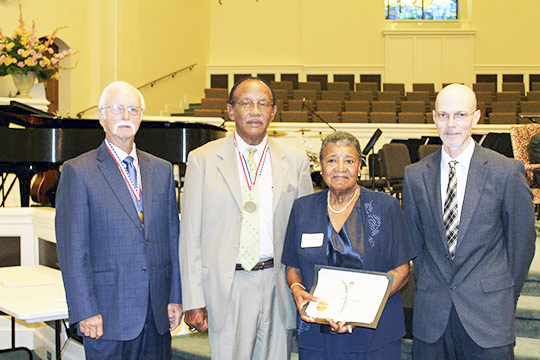 Louretta Carter Wimberly has spent a lifetime standing up for equal rights of veterans and minorities, while also working to ensure local children are receiving quality education. This year, Wimberly received the Lifetime Achievement Award at the Alabama Department of Senior Service’s 36th annual awards ceremony for the Alabama Senior Citizens Hall of Fame.

She was nominated for the honor by former Selma City Mayor George Evans, and said that it was a blessing to have received such an honor.

“I was surprised at first. The work I do for my church, my community and my family is something that I feel is an obligation for me as a citizen of Selma and as a citizen of the United States of America,” she said. “What I do is not to receive glory, but to bring about improvement amongst people in this world.”

“It is truly an honor to recognize a group of seniors who have contributed so much to improving the lives of older Alabamians. The many achievements of the Hall of Fame Class of 2018 are truly remarkable,” Cotton said. “I also offer my congratulations to the recipients of the Lifetime Achievement Commendation and Special awards.”

Through the years, Wimberly has served as Director of Veteran Affairs at Morris Brown College and Atlanta University Center in Georgia, as a Red Cross volunteer for veterans and their families, on the Advisory Board of the Veterans Upward Bound Program in Atlanta, Georgia and on the National Association of Veterans Program and Administrators.

She has also served as an appointed field reader and consultant for the Department of Health, Education and Welfare through the Office of Education Bureau of Post-Secondary Education in Washington, D.C.

Wimberly is also a member and former chapter president of the Selma Alumnae Chapter of Delta Sigma Theta Sorority, Inc. She serves in the Selma City Schools as a coordinator for the University of Alabama at Birmingham’s Gear Up Alabama program.