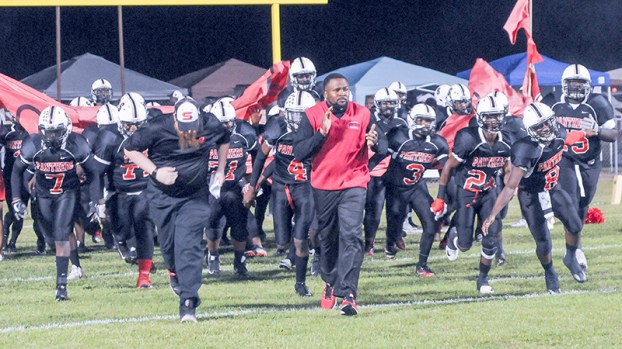 Southside head football coach Daniel Flowers leads out the 2017 Panthers. Flowers opens the 2018 season on the road against his former high school, the Northview Cougars in Dothan.

The Southside Panthers open their 2018 football season against an opponent the school has never played before, but is all too familiar to Panthers head coach Daniel Flowers.

“It’s always good to be able to go back home and play in front of your family, friends and cousins,” Flowers said. “Right now, I feel good about it. Once kickoff comes, I’m trying to beat them.”

Flowers history with Northview extended beyond his high school days. He graduated high school in 2004, and returned as a receivers coach in 2009 after graduating from Alabama State University.

Flowers’ cousin Johnny Faulk is the defensive backs coach for the Northview Cougars. When Faulks called Flowers and offered him the chance to play against his old team, the competitor in Flowers couldn’t refuse.

“I couldn’t turn it down,” he said. “I know they’re a 6A school, but I couldn’t see myself turning that game down like that.”

Flowers has been preparing for this matchup since he got tape on the Northview Cougars back in May.

Flowers has done his homework on his alma mater. Cougars running back Malachi Harvey has stood out on film. Northview also has eight returning players on offense and four returning on defense, according to Flowers.

“They got a good running back. I do know that. He can get up out of there real fast,” Flowers said. “I know they’re going to be young on defense, but on offense a good-looking o-line is back except for one kid.”

This won’t be the first time, nor the last time that Southside, a 3A school, goes up against a larger opponent. This season, they also have a non-region game against Selma High (6A). Being an underdog, isn’t a new concept for the Panthers and they are prepared for the challenge.

“I told my players that everyone is going to underestimate them and say they’re going to lose because you’re playing a bigger school,” Flowers said. “I let them know Northview went 0-10 two years ago and 3-7 last year, so it isn’t like we haven’t seen a 6A school before … They’re ready to play Northview. There is a real, calm confidence about them.”

On Friday, the two teams which have never met will compete for that first win of the season.

Flowers’ personal homecoming wouldn’t be complete without some pre-game trash talk from his family and friends in Dothan.

“All my family went there,” he said. “All of them have been calling me saying they’re going to beat us pretty bad. It’s just trash talk. I told them we’re going to see on Friday night at 7 p.m.”

Registration for the city youth football league has been extended to Sept. 5 to provide more opportunities for kids to... read more