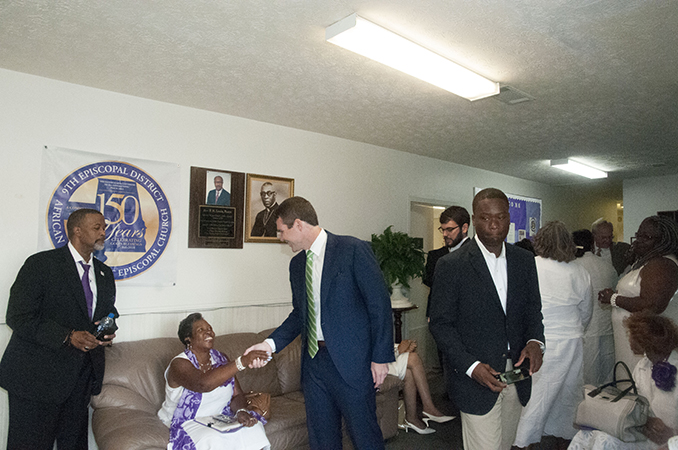 Two high-profile political figures in the state of Alabama appeared at the opening of the African-American Episcopal Church Conference on Tuesday at Historic Brown Chapel AME Church.

Former Alabama Gov. Don Siegelman and Tuscaloosa Mayor Walt Maddox, the Democrat nominee for Governor both spoke at the AME conference that featured 29 AME congregations and pastors in the Alabama River Region.

Maddox’s speech began with a story from his grandmother about the similarities a politician and a minister share.

“My grandmother said, ‘Walter, there’s not much difference between a politician and a minister,” Maddox said. “I’m honored to be at the Historic Brown Chapel AME Church and thank your pastor, Leodis Strong, for the invite.”

Maddox told the crowd the reason he decided to run for Governor against incumbent Gov. Kay Ivey.  Maddox won the Democrat nomination at the June 5 primary election, securing 55 percent of the vote. Sue Bell Cobb was second at 29 percent.

Maddox paused from his speech and gazed at the audience to ask them a question.

“Do you hear the shouts?” Maddox said. “Our problems in Alabama deserve a solution. As Christians, we hear those shouts. If I’m elected Governor of Alabama, we will honor those shouts.”

As Maddox left the podium, he received a rousing standing ovation. He traded handshakes with Siegelman, the state’s last Democratic Governor in 1998.

Siegelman spoke mainly for his son and Maddox’s candidacy. Siegelman’s son, Joseph Siegelman, is the Democratic nominee for Attorney General.

“My son’s a Civil Rights Attorney in the Johnny Cochran firm,” Don Siegelman said. “He works for the people and I’m real proud of him.  Vote Walt Maddox as the next Governor of Alabama.”

“It’s not surprising that the person who has a good chance to become Alabama’s next Governor to come by the church that was the headquarters for the National Voting Rights Act of 1965,” Strong said.