Volunteers step in for annual cleanup 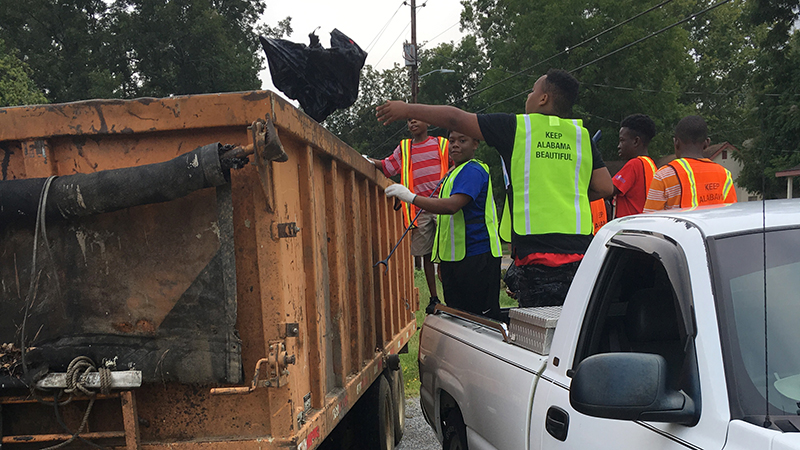 Volunteers toss trash into a dumpster Saturday morning during the annual summer cleaning and beautification day in Ward 4.

Councilwoman Angel Benjamin and more than 20 other concerned citizens of Ward 4 were up bright and early Saturday morning for the annual summer cleaning and beautification day.

The group met in front of the First Avenue Cleaners at 7 a.m. and spent approximately three hours picking up trash and garbage that had been left in Ward 4 east.

“We always have an annual spring cleaning, summer cleaning and we have a fall cleaning,” Benjamin said. “We did the summer cleaning in Ward 4 east this time, and we met on the corner of Marie Foster and First Avenue. We moved out to the side streets and thoroughfares on First Avenue, and down to the playground. We picked up so much trash, and the city had two orange dumpsters out.”

Benjamin made a special request to the city’s public works department for the two dumpsters, so the volunteers would have a place to put all the trash they picked up.

“We took loads and loads of trash to the dumpsters,” she said. “I’m thankful that the citizens in Ward 4 who were able to help us get trucks to help us throw the trash out as we went.”

The volunteers with trucks helped deliver the trash from the pick-up locations to the dumpsters so they didn’t have to waste time walking back and forward only carrying what they had in their arms.

Members of the community both young and old volunteered to help pick up the trash.

A rumored “trash trophy” got a few kids excited about cleaning up their community, according to Benjamin.

“One of the young kids jumped out of the car and said that he wanted to get the trash trophy,” Benjamin said. “A light bulb went off in my head when I noticed they would be competing for who could pick up the most trash. I had no trash trophy in mind, but now I do, so I will be presenting the trophy to one of the young people who are in eight grade and down. If not at the next council meeting, then it will be at the following one.”

Throughout the Ward, piles of trash and garbage can be spotted along the side of the road. Not in a container, but piled up and left unattended. Most of what the volunteers picked up Saturday was household garbage that was left and tossed to the side. Furniture and leftover debris from cut down trees left out for no one to pick up.

“That stuff is not supposed to be left out on the street,” Benjamin said. “Citizens are supposed to haul that stuff out to the dump site, and we get instances where citizens don’t do that. At some point, somebody has to remove it and it ends up being the city and we have no one to bill for it because we don’t know who put it out.

“We were mostly picking up household garbage,” she said. “A lot of it was on vacant lots, on the street and a lot of it was near our drainage system.”

According to Benjamin, bad habits have led to the trash problems in the community.

The volunteers did what they could, but the community as a whole could do better according to Benjamin. She advised the best way for citizens to help is to bag their trash and use bins so that it can be picked up.